07/10/2010 - The director of The Secret of the Grain returns with a powerful and uncompromising work about racism. A historical film with present-day resonance unveiled at Venice

Saartjie Baartman, an icon for many South Africans, leaves Cape Town in 1810 for London, along with her master, the merchant Pieter Caezar, who intends to put her on show in a travelling fair. London audiences are fascinated by the young woman’s physical deformations, which are typical of Khoikhoi women: steatopygia (hypertrophy of the buttocks) and Sinus pudoris (greatly enlarged labia minora).

Transferred to Paris and handed over to another master, enigmatic bear tamer Réaux, Saartjie wins over a new audience in high-society drawing rooms, serves as inspiration for a comic opera and attracts the curiosity of scientists, in particular well-known anatomist Georges Cuvier.

When her popularity wanes, Saartjie is forced to prostitute herself and in the end dies of pneumonia and venereal disease. Cuvier dissects her body, preserves her organs, takes an impression of her body and publishes the conclusions of his research which condemns "those races with depressed skulls" to eternal inferiority.

Abdellatif Kechiche, who won a Golden Lion in 2001 for his debut film Poetical Refugee and Venice’s Special Jury Prize in 2007 for The Secret of the Grain [+see also:
film review
trailer
interview: Hafsia Herzi
film profile], has presented Black Venus [+see also:
trailer
interview: Abdellatif Kechiche
film profile] in competition at the 2010 Mostra. The film reconstructs the life of Saartjie, whose mortal remains were returned to South Africa and buried in her native region on South African Women’s Day, on August 9, 2002.

With long scenes filmed in the French director’s trademark style, with shoulder-held camera in continual movement and extreme close-up shots that linger on the actors’ faces, Black Venus explores the different stages of the degradation and oppression inflicted upon the character (played by Yahima Torres), without omitting vile and macabre details that may leave viewers feeling uneasy.

Kechiche’s reconstruction recreates and emphasizes all the ambiguities and nuances of the historical episode. Saartjie isn’t a "slave", she wasn’t forced against her will to display her body, to pretend to be a dangerous savage in an absurd pantomime. She was instead the victim of a moral violence, no less intolerable than the physical kind, while she aspired to the role of an artist, dreamed of expressing herself one day and making her name as a singer, musician and dancer.

The prevailing racism in a colonialist era, the hypocrisy of the cultured classes, the intellectual dishonesty of the scientists who justified the exploitation of African people, power relations between men and women and sexual humiliation thus symbolise and make way for the pure violence of the gaze, that of the viewer, and the complexity of the relationship between people in show business and those who watch.

Kechiche has described how when he started out as an actor he found it hard to deal with people’s expectations of him as an Arab, he felt caged in. Just like the savage Saartjie. Today, as a director, he is caged in by the aesthetic responsibility of directing the viewer’s gaze. Like Saartjie’s skilful managers, Caezar and Réaux (played by Andre Jacobs and Olivier Gourmet, respectively), and even scientist Cuvier (Francois Marthouret), who are concerned with giving audiences what they expect.

The director of The Secret of the Grain returns with a powerful and uncompromising work about racism. A historical film with present-day resonance unveiled at Venice

An open look at the victims of oppression

Interview with the director of Black Venus, which sparked controversy at the Venice Film Festival for its strong themes and raw and disturbing images

Xavier Legrand is a potential surprise entry, with both Benoît Jacquot and Xavier Beauvois well-placed, while Finkiel and Guédiguian lie in ambush along with the mysterious Kechiche

Je veux être actrice: “Become what you are” 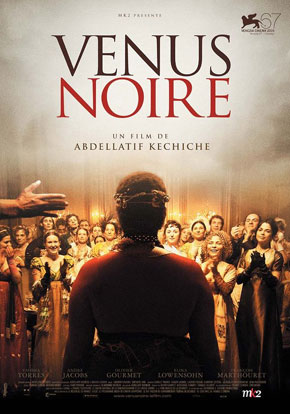