26/10/2010 - The great forgotten one among the Cannes Film Festival 2010 award winners. A subtle and remarkably acted work that perfectly captures the complexity hidden beneath life's simplicity

A London couple in their mid-50s is at the heart of Another Year [+see also:
trailer
interview: Mike Leigh
film profile], the latest, highly anticipated film by Mike Leigh. It screened in Competition at the Cannes Film Festival, where the British filmmaker won the Palme d'Or in 1996 for Secrets and Lies and Best Director for Naked in 1992.

In the film’s first four minutes, as an example of what we will see over the next two hours, Leigh offers us an exercise in sublime acting with a cameo by Imelda Staunton (Vera Drake [+see also:
trailer
film profile], which won Leigh a Best Director BAFTA and the Golden Lion at Venice 2004) as a depressed housewife looking for a doctor to prescribe her sleeping pills. At the medical counsellor’s question "How happy are you on a scale of 1 to 10?", the woman responds without hesitation: "1".

The irony of this scene leaves its mark on the entire film that from it’s very title aims to depict the traces of time on the generation that was at the Isle of Wight Festival in 1970, which grew up loving the Beatles, Stones and Elvis and today is trying to be happy.

The medical counsellor, Gerri (Ruth Sheen), is happily married to geologist Tom (Jim Broadbent). The couple (whose names recall the cat and mouse of cartoon fame) live in a small house with a small greenhouse in which they grow flowers. Outside of the city, they own a garden that produces tomatoes and beans that enrich family dinners (both are great cooks). The life of the married couple, tied to the harvest of the earth, is thus marked by the seasons. Opening in spring, the film lasts until the following winter, and is perfectly divided into four parts.

In the first part, the “perfect couple” are visited by Mary (Lesley Manville), a secretary who works in Gerri’s office and long-time friend. Mary is still attractive but terribly lonely. She is constantly seeking love, as well as refuge: in alcohol to numb her anxiety, and in the perfect couple’s home.

Summer brings Ken (Pere Wight), a widow and old friend of Gerri’s, who is also desperate, has a tendency for drink and a crush on Mary. Like Mary, Ken confesses his suffering to the couple while drunk.

In autumn, Mary becomes infatuated with Joe (Oliver Maltman), the 30-year-old son of mutual friends, whom she’s known since he was a kid and who reveals that he finally has a girlfriend.

In winter, Ronnie (David Bradley), Gerri’s older brother who lives in Derby, loses his wife and after her funeral is taken in by the couple. Mary arrives in their absence and the coarse Ronnie observes through his pain this fragile woman who is falling apart. Later, the family reunites and although Gerri is annoyed by Mary’s intrusion, she invites the latter to stay. A slow, meaningful fade to black on Mary’s face closes a film whose linearity hides a complex narrative and technique that has few rivals in current British cinema.

With his excellent cast, Leigh recounts the essential and leaves the rest unsaid, capturing with his trusted DoP Dick Pope the changes in light over the various seasons with the mastery of a Renaissance painter.

more about: Another Year

Stories and emotions in 120 seconds: Catania’s Trailers FilmFest is back 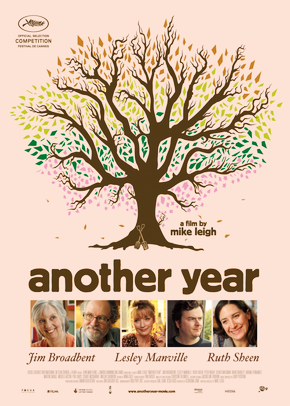