Vlado Škafar’s follow-up to his 2009 documentary Letters to a Child, which participated at Rotterdam, is a slow-burning, highly emotional and lyrical father-son drama.

Dad [+see also:
trailer
interview: Vlado Škafar
interview: Vlado Škafar
film profile] opens with a slow fade in a forest on a sunny morning. The narrative title informs us it’s Sunday, and we see the middle-aged father (Milivoj Ros) and ten year old son (Sandi Salamon) fishing. From their exchanges it is obvious that the boy lives with his mother, and that this is one of their rare weekends together. Although their conversation at first seems trivial, we soon come to understand that it touches important issues of language, communication, interpersonal relationships, growing up and growing old.

As the film progresses, without an actual plot in the traditional sense, it manages to capture our imagination and reasoning in a peculiar way. Most viewers will be challenged to think seriously about their own family relations and question them on various new levels. Deeper and deeper into the father-son story, the film becomes more and more emotional and moving, leading to quite touching conclusions both about its characters and ourselves.

In his first feature film, Škafar displays a lyrical leaning also evident in Letters to a Child, which was more of a film essay than a classical documentary. Shot on digital by Marko Brdar and edited by Škafar and Jurij Moskon, Dad simultaneously looks very natural and feels calculated for effect, but in a positive way. Colours are bright and lively, and as the most of the film happens in nature, green, blue and yellow dominate- plus father’s red sweater.

Transitions between scenes are executed in extremely slow fades, and Škafar also uses some transpositions that provide a hallucinatory effect. Some of the scenes are covered by voiceovers of father and son: we watch them lying on the ground and looking at each other, while we hear a dialogue that could belong either to that scene or another one.

Opting for such an intimate story, Škafar uses only two characters so the choice of actors was crucial. And what a success it turns out to be. Ros, also one of the producers of the film and debuting as actor, has such a wide range of emotions to present it is a wonder he never acted before. But this is not an over-the-top performance usually associated with family dramas. It’s a subtle display of fine, close to imperceptible changes of mood that is enabled to shine by the low-key feeling of the film as a whole.

The child actor Salamon is another perfect choice: this is not one of the cute kids casting directors usually use to generate affection in the spectator. Salamon is an ordinary-looking kid but his acting is far from ordinary as far as child performances go. Almost unbelievably natural, he easily makes one believe he is really the son of this father and that their relationship is exactly the way it is.

Near the end of the film, Škafar includes a surprising documentary twist which deals with modern-day capitalism, taking place in the same region of Prekmurje, and even more surprisingly fits the story.

The film is bookended by close-up shots of water spiders on a lake or river, light, airy insects that perfectly capture the spirit of the film.

Vlado Škafar is one of the founders of the Slovenian Cinematheque. His new film Dad was the first Slovenian film to screen in the Critics Week sidebar of the Venice Film Festival

Vlado Škafar talks about his his debut feature, Dad, presented at Estoril

“It's not about doing; it's about being”

Slovenian director Vlado Škafar spoke to Cineuropa about his new movie, Mother, his view on the art of film and his unorthodox creative process

Mother: A cinematic poem of mother and daughter

The Slovenian Film Centre has announced the results of its 2011 public competition for funding of film projects. These include projects by award-winning Nejc Gazvoda (A Trip) and Vinko...

Memories and secrets of three former high-school friends on a road trip across Slovenia. An inventive, multiple award-winning road movie.

Motovun Film Festival has announced the main competition for the Motovun Propeller Award, nominees for the regional Bauer Award and partner country Ireland, for its 12th edition which runs July...

Munich has been celebrating summer in style for the past 29 years with an international festival that has become the most important one of the season in Germany, with over 65,000 admission tickets... 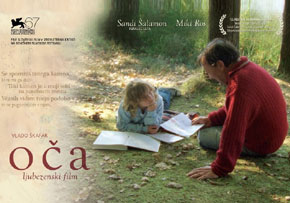