03/12/2010 - In a moral vacuum created by political changes in Poland, a pair of criminals find their salvation in friendship and sacrifice

Marcin Wrona returns to the themes of sacrifice and fatherhood, which lay at the heart of his feature debut My Flesh My Blood [+see also:
film review
trailer
film profile], with the gangster redemption story The Christening [+see also:
trailer
interview: Marcin Wrona
film profile].

A brief opening scene establishes the relationship between the main characters: Michal (Wojciech Zielinski) saves Janek (Tomasz Schuchardt) from drowning. Cut to a chase in a snowy rail yard, where Michal is apprehended by police for an unspecified crime.

Next we see Janek arriving in Warsaw years later after a stint in the army. Cocky and obstreperous, he arrives unexpectedly at Michal's door and meets his friend's wife, Magda, and infant son. Vodka ensues.

Michal has become a successful, honest businessman, but Janek anticipates only returning to his former criminal activities. Michal disapproves but nonetheless asks Janek to be his son's godfather at the baby's baptism in a week.

In that time, Janek learns that his old gang is extorting money from Michal for ratting out one their lads after his arrest. Michal's money is now gone and he will soon pay the balance with his life.

Michal has not told his wife any of this, however, and she remains painfully uninformed throughout the story. Magda (Natalia Rybicka) knows her husband is in trouble but assumes that Janek is the source. Michal continues to lie to her even while inexplicably pushing her toward Janek, who he hopes will replace him.

Janek wavers between loyalty to his doomed friend and to his old cohorts. If he stands by Michal, he puts his own life at risk. If he stays with the gang, he risks his soul, as he learns when he accompanies the thugs on a revenge mission.

Wrona approaches the true-crime genre with subtlety and understatement, focusing more on the characters' emotional turmoil than on actual physical violence. The few scenes of disturbing brutality are all the more powerful for their suddenness. The rough stuff begins without prelude and with no chance of escape.

Likewise there is no escape from fate. Wrona counts down the days to the christening with intertitles. Michal is stubbornly resigned to his fate but Janek – and the audience – cling to the hope that Michal can avoid the inevitable.

Wrona ratchets up the tension on the fateful Sunday as Michal's unwitting family and in-laws arrive for the ceremony. Each knock at the door sounds like a gunshot. The vengeful gangsters are in the background, but the director never shows us their faces on this last day. They are Judgement itself: anonymous, implacable.

The film has many similarities to the passion narratives found in the gospel, but Wrona says that he did not set out to make a Christian allegory. Sacrifice and salvation, it appears, lie close to the roots of Polish society and organized crime.

Wrona's production shows the influence of Romania's recent wave of low-budget successes. Most scenes are shot with handheld cameras and natural lighting, giving the film a personal, home-movie aesthetic. Although set in Warsaw, the scenes are shot in anonymous locations without familiar landmarks, implying that this story could happen anywhere.

more about: The Christening

In a moral vacuum created by political changes in Poland, a pair of criminals find their salvation in friendship and sacrifice

"I think the viewer is more intelligent than I am"

Marcin Wrona's second feature approaches the gangster genre from an art-house angle. Cineuropa caught up with the Polish director at the Bratislava International Film Festival

The Wall, a barrier between two Polands

The story composition and the rapid and rough editing and cinematography raise the film far above the average police and political thriller.

Having attracted attention in 2009 with Recruited Love, Tadeusz Król (pictured) is currently shooting his second feature: Last Floor, a psychological thriller based on real-life events that took... 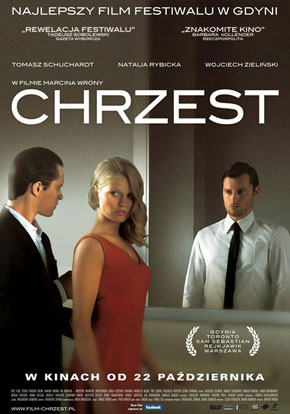