03/12/2010 - Alex de la Iglesia orchestrates a grotesque and excessive spectacle in order to depict, with his usual dark humour, a stormy love triangle, a political metaphor for late Francoism

Freaks, Alfred Hitchcock, Carol Reed's Trapeze, Fellini and gore films. All that and much more, along with some opening credits that are powerful and full of references (in which Alex de la Iglesia, the current Spanish Film Academy President looks back at his childhood ghosts: from Frankenstein to Franco, and Paul Naschy), is at the heart of the ninth feature by the director of hits such as The Day of the Beast, Common Wealth and Dying of Laughter. The latter film also analysed a brutal duel between two men, but whereas its setting was the television world of the political transition towards democracy, and its comedians two fratricidal antiheroes, here the action is transposed to the late Francoist period and a grey travelling circus, inhabited by elephants, dwarves and a (clumsy) human cannonball.

Standing out among them is the clown who dazzles the little ones with his talent, Sergio (a phenomenal performance, as usual, from Antonio de la Torre), a fellow capable of making children happy and frightening his caravan companions with his despotic personality, as they are subjected to his whims, abuse and dubiously funny jokes.

The only one who doesn’t accept this tyranny has the pale face of a sad clown: Javier (Carlos Areces), an adult deeply damaged by a traumatic childhood in which his father, also a clown, suffered the injustices of the Civil War and its gloomy consequences. Javier will therefore seek revenge by attacking this charming and tyrannical monster, his feelings spurred on by the fascination he feels for acrobat Natalia (Carolina Bang), the sexual partner of the sadistic circus leader.

The spectacle, tragedy and Punch-and-Judy-like show are served up to viewers, generously seasoned with chiaroscuro buffoonery, with much Valle Inclán-style spirit and an ending that manages to elevate the drama to climatic heights difficult to reach after such a flighty, uneven and tangled show as that offered by Alex de la Iglesia, based on a storyline he wrote single-handedly, without the involvement of his regular co-screenwriter Jorge Guerricaechevarría.

The film takes its title from a tearful song by Raphael, a true symbol of the era it describes: decades in which Spain was plunged into darkness, subjugated and manipulated physically and psychologically, a time which still takes its toll. This political metaphor is the great achievement of this frenetic film which doesn’t leave viewers indifferent: it either fascinates or repels.

One of its most prominent fans is Quentin Tarantino himself, president of the jury which awarded it two prizes – Best Director and Best Screenplay – at the latest edition of the Venice Film Festival. Its detractors include those who insist on the arbitrariness, capriciousness and lack of self-control in the films of the Bilbao-born director, who is brimming with imagination, cheekiness and talent and proves, with his latest venture, that he knows no limits nor the meaning of restraint. All the same, viewers are sure to find a grotesque tale and the brutal portrayal of those two Spains which still co-exist.

more about: The Last Circus

Santi Amodeo shooting Me, Myself and My Dead Wife

Alleluia, winner of the Méliès d’Or 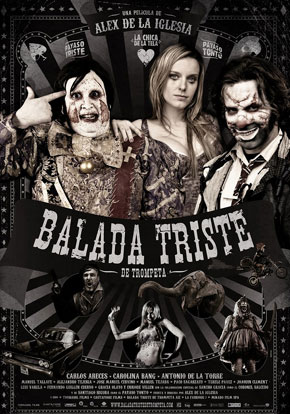