A film crew in the middle of the tropical rainforest is making a movie about Columbus’s arrival in America and his thirst for gold, as well as his conflict with the religious defenders of the indigenous people. The latter are played by local actors, who, far from the spotlights and make-up, will relive a new invasion, of the politicians and multinationals trying to privatise a basic and essential commodity – water. Reality seeps into fiction and changes the pace of the film shoot, while the parallels between the colonial past and colonised present become obvious.

Everything merges, becomes confused and changes according to events that weren’t in the script-within-the-script and can’t be planned – or even imagined – by the production department. While someone from the team shoots the “making of” video, we witness three films at the same time: one about the conquest of America that they are recreating; one about the social uprisings in the country to which the technical-artistic team have travelled; and the documentary capturing the hidden ins and outs, the quarrels and the difficulties of an artistic project unavoidably permeated with reality.

Ken Loach’s regular screenwriter Paul Laverty has penned a magnificent script which condemns abuses of power, invasion and brutal present-day mercantilism without neglecting the characters, people he knows only too well because they are part of his professional sphere: cinema. Here we have a producer capable of anything in order to ensure the film shoot doesn’t come to a standstill (a wonderful performance, as always, from Luis Tosar); an idealistic, insensitive and weak director (Mexican actor Gael García Bernal); a lonely veteran actor in the know about everything (a superb Karra Elejalde); as well as extras, young, supposedly politically aware actors and their many shortcomings, vices, lies and conflicts.

The vibrant, politically engaged and intelligent storyline is handled by the equally impressive director, Icíar Bollain, vice-president of the Spanish Film Academy and Laverty’s partner. The fifth directorial foray of the actor-filmmaker behind Take My Eyes [+see also:
trailer
film profile], among other hits, is representing Spain in the nomination race for the 2011 Best Foreign Language Film Oscar.

The result follows in the footsteps of Costa-Gavras, Werner Herzog and Francois Truffaut, with a political message that focuses on the hidden ins and outs of cinema (and its miseries) in wild rainforest settings. It also focuses on a historical wound: the conquest of the New World wasn’t the heroic venture shown in Spanish school books and, moreover, similar invasions and abuses are repeated cyclically and in other spheres, not just material.

Movie lovers will moreover enjoy seeing cinema as an industry with money at stake, which requires you to be both a calculating strategist and a bit reckless, romantic and idealistic in order to throw yourself heart and soul into such a venture. This is precisely how great movies are made, or not, as shown by films such as Lost in La Mancha – the documentary about Terry Gilliam’s cursed Don Quixote film shot in Spain, scuppered by the destructive force of reality – and clear-sighted meta-fictions like Even the Rain.

Co-produced with Mexico and France, the film reaffirms the winning streak of Morena Films, the company that triumphed at the box office – and at the latest Goya Awards – with Cell 211 [+see also:
film review
trailer
interview: Daniel Monzón
film profile] and will surely repeat its success with Even the Rain [+see also:
trailer
interview: Icíar Bollaín
film profile], which screened at the Valladolid, Cuenca and Ronda film festivals before its commercial release in theatres.

more about: Even the Rain

“A challenge for me and the whole team”

Icíar Bollaín brings the life of Yuli to the big screen

The Olive Tree: In search of the lost tree 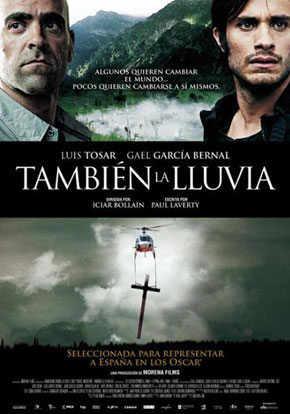