The visual complexity of The Mill and the Cross [+see also:
trailer
making of
interview: Lech Majewski
film profile] is evident from the film's opening scene. Viewers recognize Pieter Breugel's painted landscape, glimpsed in any one of countless art history texts. Admired briefly, maybe, on a visit to the Kunsthistorisches Museum in Vienna. There are the familiar, peasant figures, frozen for an instant in their miniscule, cryptic business.

And then they move.

"My painting will have to tell many stories," the character of Breugel says, speaking for himself (and for director Lech Majewski) at the beginning of the film. “It should be large enough to hold everything. Everything — all the people — there must be a hundred of them.”

At least. Filmed and photographed, near and far. Each inserted separately via visual effects into the landscape of Breugel's painting The Way to Calvary in a process that Majewski says took more than two years.

The Mill and the Cross is not only a marvel of visual effects but also a masterpiece of storytelling, extracting a tidy handful of narratives from a sprawling canvas. It presents the creation of the painting, a compelling treatise on Breugel's symbolism, a glimpse of life in the Spanish Netherlands during the Inquisition, and a Passion narrative. Not bad for a 91-minute movie.

Breugel famously scattered hundreds of stories throughout this and his many other paintings. Majewski selects a handful of those and zooms in, all the while maintaining a fluid film narrative. The most harrowing is that of a young couple, the man beaten and left for dead on a breaking wheel. But there's also candid scenes from Breugel's own family, his young wife riding herd on an unruly tangle of boys.

Majewski gives the audience a treat in the character of the miller — a stand-in for God, Breugel explains. The scenes of the mill are among the most delightful in the film. It's nice to think that God wakes each morning, stirs his fat wife with a punch to the shoulder, and waddles to the kitchen table for a crust of day-old bread before starting work.

The mill is a story in itself, a gargantuan creaking contraption, part digital wonder and part old-fashioned-carpentry. Majewski's sound design makes mill's rumblings and thumpings part of the film's score. The clop of wooden shoes, horses' thundering hooves, woodchoppers' axes and the inevitable hammers all serve to drive the narrative forward while simultaneously making a philosophical point.

Although inspired by a scholarly text, The Mill and the Cross is not wordy. On the contrary, with the exception of brief harangues from Spanish soldiers, the only lines belong to Breugel (Rutger Hauer), his patron Jonghelinck (Michael York) and the mother of a condemned man (Charlotte Rampling).

The trio's performances are strong, relying more on the actors' visual expression than dialogue. Hauer's lined, drooping and coarsely shaven face has never been so expressive. York's Jonghelinck is a portrait of a powerless man struggling to maintain dignity. Rampling is the definition of sorrow.

The various fragments of the plot move forward together and intersect in a crowd scene in which Majewski recreates the precise moment frozen in Breugel's painting. There's a masterful caesura before the action resumes.

The Mill and the Cross is a stunning demonstration of Majewski's vision and ability. He co-wrote the screenplay with Michael Francis Gibson, whose book The Mill and the Cross – Peter Bruegel's "Way to Calvary" was his inspiration. In addition to direction and sound design, Majewski also did his own camera work (along with DoP Adam Sikora), landscape design and composed elements some of the music.

The film, however, is never showy. It engages, amuses and educates the audience and then takes a bow. The ending gently suggests audiences can find these stories and many more hanging on walls at museums and galleries. Majewski has merely stepped in and done the imagination work for us. 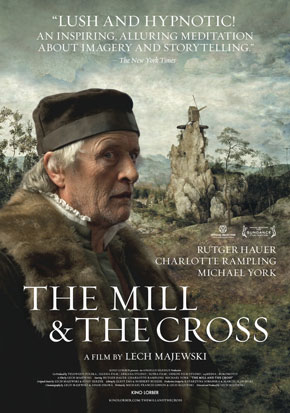