18/03/2011 - The vengeful tale of an exile who returns to Bosnia in 1991. Caustic, tragicomic humour and superb acting mark the Oscar-winning director's return to form

The new film by Oscar-winning Bosnian director Danis Tanovic marks his return to home soil and subject matter. Co-produced by Bosnia’s 2006 with Asap Films (France), Autonomous (UK), Studio Maj (Slovenia), Razor Film Produktion (Germany) and Art & Popcorn (Serbia), it was the perfect opener for the Sarajevo Film Festival, the most important film event in the Balkans, which is also crucial for regional co-productions and their Western European partners.

Circus Columbia [+see also:
trailer
interview: Danis Tanovic
film profile] takes place in a small town in Herzegovina in the summer of 1991, on the eve of war in the former Yugoslavia. Divko (Miki Manojlovic) returns after 20 years of working in Germany, with a red Mercedes, pockets full of money and a decades younger trophy wife-to-be Azra (Jelena Stupljanin).

His wife Lucija (Mira Furlan) and 19-year old son Martin (Boris Ler) are living in his house and his first step is to evict them with the help of the new mayor, Ivanda (Milan Strljic). Divko continues taking revenge on everyone who he feels did him wrong in the past, and it seems that with his money anything is possible. But war looms over the region, and will decide the destinies of all the characters.

Divko left Yugoslavia because his father was an Ustasha (Croatian fascist), so he felt threatened by the communist regime. Now the climate in the country is perfect for his return, as pro-Croatian Ivanda is in power. The new government is opposed by Savo (Svetislav Goncic), captain of the local barracks of the Yugoslav Army, who is also trying to protect Lucija and Martin.

Adapting the bestseller by Ivica Djikic, Tanovic provides the script with all the specifics of the Herzegovinian mentality, a mature subject matter and a healthy dose of humour. Technical credits are generally top-notch, but the biggest accolades must go to the cast. One of the region’s most prolific actors, Manojlovic (Just Between Us [+see also:
film review
trailer
film profile], The World is Big and Salvation Lurks Around the Corner [+see also:
trailer
film profile], Irina Palm [+see also:
film review
trailer
interview: Sam Garbarski
interview: Sébastien Delloye
film profile]) gives his character typical Herzegovinian stubbornness and wrath of an exiled man, while legendary Croatian actress Furlan infuses the underwritten character with strength and energy.

But what impresses most are young thesps Stupljanin from Belgrade and Ler from Sarajevo. In his feature debut, Ler shows great ability for a nuanced performance, and Stupljanin, in her second feature film, proves that Azra is not just the stupid bimbo Divko takes her for. She acts almost without a single line in the first 30 minutes of the film, developing her character into a simultaneously strong and fragile young woman. Veterans Strljic and Goncic round up the experienced cast, and casting directors should also keep an eye on newcomer Mario Knezovic, who plays Martin’s best friend Pivac.

Tanovic has managed to make a successful film for the widest audience without resorting to base humour, probably the hardest discipline in Balkan cinema. Besides the potential for strong box office throughout the former Yugoslavia, the film should also play well as a festival crowd-pleaser.

The vengeful tale of an exile who returns to Bosnia in 1991. Caustic, tragicomic humour and superb acting mark the Oscar-winning director's return to form

Serbia sends Depth Two and Humidity to the Forum

A Quintet: all roads lead to Berlin 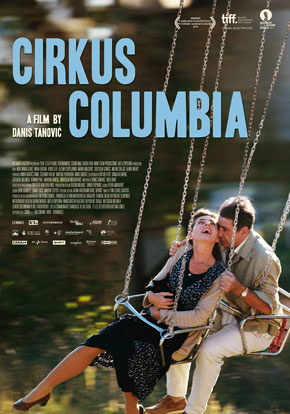