15/04/2011 - Belgian director Michael R. Roskam looks at the mafia behind hormone trafficking and animal doping in his highly acclaimed debut feature, unveiled in the Berlinale Panorama 2011.

The image that stays with us from Bullhead [+see also:
trailer
interview: Bart Van Langendonck
interview: Michaël R. Roskam
film profile], a film about Flemish farmers, cattle breeders and apprentice mafiosi, is the nape of Matthias Schoenaerts’s neck. This neck, as broad as an arm, deep-set in amply rounded shoulder blades, carries a square head exuding a determination and stubbornness that are nonetheless betrayed by a slight inclination.

Jacky (Schoenaerts), whose experiences are detailed in all their shades, has shattered his own limits. This beast, capable of killing out of jealousy, with no qualms whatsoever, fades into a tiny and fragile creature before the mirror. Within him, he carries the age-old wound of the human being who will never be divine and blames himself for his powerlessness. Bullhead is the tragedy of a man who didn’t ask to be born, but has been forced to live.

From sunrise to sunset, worldly immateriality continues its rhythm without a thought. "Onwards, onwards again!": Schoenaerts (the young man who gets lost, like Tom Thumb, in the maze of direct communication in Alex Stockman’s Pulsar [+see also:
trailer
film profile]) carries the drama of the Flemish Boers (farmers) with his stocky physique developed specially for the role (he put on 27 kilos).

Small-scale livestock breeders and farmers also dream of brand new sports cars, holidays with "sun included" and villas with swimming pools. And if you have to dope the cattle to fatten them up faster, reduce breeding costs and get rich quick, then why not? So what if certain miracle products are not entirely legal? Everyone knows that health guidelines are drawn up by civil servants who know nothing about reality.

With his debut feature, Bullhead, Michaël R. Roskam takes us on a guided tour of provincial Flanders. Not that of the well-to-do villas on the outskirts of Brussels, but of Limburg’s quasi-industrial farms, where the animal dung never leaves people’s boot soles, stuck to the ground of meadows and fields.

A painter by heart and by training, Roskam became a film enthusiast by watching the work of Martin Scorsese, Brian De Palma, Akira Kurosawa and Orson Welles, and here pays homage to his masters. There are punches, fighting, good guys and bad guys, villains with hearts of gold, the so-called righteous who are actually real crooks, betrayed friendships, misunderstood love affairs, guilt and redemption. These themes, which plunge bad films into syrupy tedium and give good films an aura of sensitivity and humanity, give Roskam a chance to display his talent. With meticulously framed images like comic-strip boxes, the story gradually moves forward, revealed in fits and starts, switching between narrative present and childhood past.

Sordidness is glorified in the form of Schoenaerts, who is too good-looking to be beastly. Wounded to the core, buried beneath an armour of insensitivity, he numbs his pain with drugs to empty his mind, but in his eyes we can see the promise of the man he could have been if he had made a life for himself somewhere other than his farm in Limburg.

The Beauty, Lucia (Jeanne Dandoy), who is drearily ordinary, with simple and down-to-earth dreams, carries within her the generosity of noble souls. She is the type of woman who would have liked to give herself heart and soul if she hadn’t feared that her naivety would be despoiled and trampled. This disenchanted, all-too-modern tale simmers with a hunger for justice to the point of explosion.

Belgian director Michael R. Roskam looks at the mafia behind hormone trafficking and animal doping in his highly acclaimed debut feature, unveiled in the Berlinale Panorama 2011.

Racer and the Jailbird wins big at the Flemish Ensors 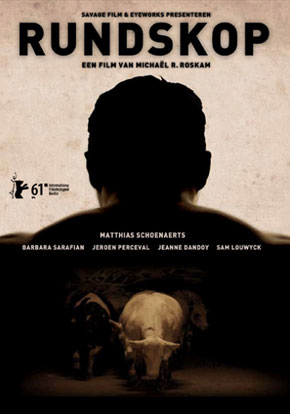