28/04/2011 - Lars Von Trier turns to Official Competition at Cannes with his personal vision of the end of the world.

Lars Von Trier turns to Official Competition at Cannes with the highly anticipated Melancholia [+see also:
trailer
interview: Lars von Trier
film profile], his personal vision of the end of the world. Kirsten Dunst is Justine, an advertising copywriter suffering from chronic depression who is about to get married in a remote castle. The wedding has been organised down to the last detail by her sister Claire (Charlotte Gainsbourg) and her rich, methodical brother-in-law (Kiefer Sutherland), but the ceremony is a fiasco.

Later, in the same place, Claire once again takes in Justine, who has sunk into a profound depression. Justine slowly gets better as Melancholia, a planet ten times the size of ours, draws closer in its collision course with Earth.

As he previously did in Antichrist [+see also:
film review
trailer
interview: Lars von Trier
film profile], the Danish director opens with a lyrical and visually demonstrative scene, which sets the tone to the film, blending the power of Wagner to the aesthetics of Annie Leibovitz. These scenes, in extreme slow motion, take full advantage of the Phantom HD camera (used in the opening sequences of Antichrist) and the detailed work of DoP Manuel Alberto Claro.

Melancholia is divided into two segments, entitled "Justine" and "Claire". In "Justine", von Trier portrays the effects of melancholy on people affected by it, including the director himself, and their relationship with the world. Justine makes fun of her wedding until she has to inevitably face it. When the moment comes, her doubts get the upper hand. A cynic, von Trier has little respect for the wedding ritual, which takes on a bent reminiscent of Festen by fellow Danish director and friend Thomas Vinterberg.

The second part, "Claire", actually continues Justine’s story, bringing out an aspect of her sadness that follows the principle of communicating vessels with her sister. Since she has nothing left to lose, Justine accepts Melancholia as a cure for her depression. She gives in to it. The planet resembles her and she awaits it, displaying an unexpected force of character. Although unflappable until now, Claire is shattered by the imminent devastation. Melancholia threatens her family and everything she cares about in a world in which, unlike her sister, she has found her place.

Yet mass destruction actually doesn’t interest von Trier, who keeps the story surprisingly intimate. Melancholia is shot with a handheld camera in a locale cut off from the world, far from the media commotion and chaos presumably gripping everyone in the last moments of civilisation. The film says nothing about this and prefers to focus instead on the smaller dimension, which is supported by some particularly effective visual effects.

The atmosphere is similar to Tarkovsky’s Solaris and the aura emanating from Melancholia’s advance is increasingly stronger, until it envelops viewers in fascinating suspense. Like Justine, the audience awaits a known end. Like Claire, it fears the epilogue. Von Trier reaches his target well, allowing himself a small touch of sentimentalism in the very last instants.

The film’s strong emotion sets it apart from the sensationalism of Armageddon and Deep Impact, which were about the same subject. Melancholia shares nothing with those blockbusters. At most, it’s similar to Richard Kelly’s Donnie Darko, which tackles the end of the world with the same intimacy, beginning with the main character’s melancholy. Von Trier adds a touch of class and an autobiographical depth that make Melancholia the leader of a genre the standards for which are now very high.

“We have stuck Arab cinema in a pigeon-hole: I want to fight against these stereotypes”

“I’ve never killed anyone myself… If I do, it will probably be a journalist” 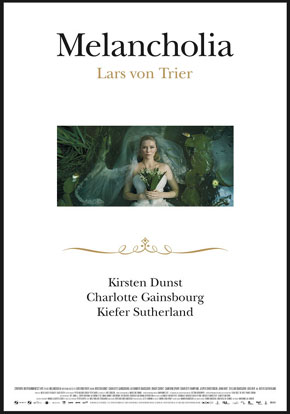