25/05/2011 - After Shanghai Trance and R U There, Dutch director David Verbeek has made another China-set film in Mandarin.

Verbeek has lived and worked for several years in the booming Chinese metropolis, and is, somewhat unlikely, emerging as one of its most interesting chroniclers, someone who knows the city well enough to know where to look, but also, since he’s a foreigner, someone with enough distance to show how things really work.

As an added bonus, and unlike his Chinese colleagues, his films are not primarily made for the local market, which means they don’t have to be approved by the Chinese censorship committee (except for the Chinese release, as was the case with Shanghai Trance).

This combination of local knowledge and liberty allows Verbeek to explore some of the darker corners of Shanghai life as well as some of the topics present in all the titles of his growing filmography that includes the 2010 Un Certain Regard title R U There [+see also:
film review
trailer
interview: David Verbeek, director of …
film profile], which was shot in Taiwan. One of the most prominent recurring themes is the difficulty of establishing real contact in the digital age and having real, meaningful and honest relationships.

Club Zeus is a male host club in Shanghai, where pretty host boys entertain women. The idea behind the male host club, a fashion that has been imported from Japan, is not to have sex, but simply to offer companionship, friendship and a certain kind of platonic love.

In a big city like Shanghai, which is developing at a dizzying pace, there are of course high-powered female executives for whom the male host clubs offer an enticing and low-maintenance alternative to a real social life. But ironically, a large part of the clientele of the male host clubs comes from within the business: the host girls of the female variant of the clubs, who look to socialise in a similar manner as they do with their own clients. It’s almost a closed system.

The film’s entry into the world of host boys is the handsome Leonardo (Ray Zhao), who works long hours to keep his clients happy and hopefully bind them to him in a more permanent way. He does everything he can to be as charming as he can without coming off as fake or corny. It’s truly a job. His objective: to become the favourite of female costumers who will spend a lot of money and keep coming back to the club, especially for him. It’s clear that Leonardo is very good at what he does.

One day, the club’s former star host, Sly (Zheng Qi), comes back to town. He left a year earlier without any explanation. Leonardo used to be his protégé and they shared a spartanly furnished room together. They even called each other brothers and Leonardo owes his position to Sly.

Offering no explanation as to what happened in the past year, Sly tells Leonardo he wants him to stop hosting. But the Club Zeus proprietor obviously won’t let the best host leave all that easily, so Sly decides to buy Leonardo’s freedom. But in order to do that, he needs money, and there’s only one thing he knows how to do.

Shot on a tiny budget over a very short period, Verbeek nonetheless manages not only to coax terrific and complex performances from his two leads, but also imbues the film with a visual look that’s all shiny surfaces that look pretty but offer no warmth, thus visually underlining some of film’s major themes.

A European filmmaker in China

After Shanghai Trance (in competition at Rotterdam) and R U There (Un Certain Regard section at Cannes 2010), the Dutch director has returned to China for Club Zeus.

After Shanghai Trance and R U There, Dutch director David Verbeek has made another China-set film in Mandarin. 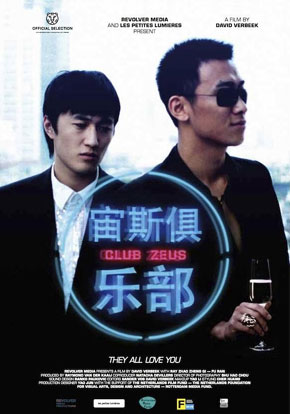