08/06/2011 - Ulrich Kölher dips into the troubled waters of European humanitarian action in Africa in the film which earned him the Silver Bear for Best Director at Berlin in 2011.

As in his previous film, the director portrays the crisis of a family crisis, here torn between two worlds and two different perspectives. German doctor Ebbo has been living in Cameroon for years with his family, and oversees monies for curing sleeping sickness. His teenage daughter is studying in Germany, and his wife wants to be near her and leave their small community of Yaoundé.

Ebbo is torn – he doesn’t want to lose the woman he loves, but he feels like a complete foreigner in Europe now. Although there’s no longer anyway to continue getting funds to cure the sickness, which has almost been eradicated, and despite the fact that surrounding environment is increasingly more corrupt, Ebbo wants to stay.

“I was interested in those people who work in the field of humanitarian aid,” said the director: “They like in a world in which they are spectators, like privileged outsiders”. Köhler’s personal experiences – he grew up in the Congo/Zaire with parents who worked for an NGO, before returning to Germany – in the film is a nuanced reflection on Europe’s role in developing countries.

“There’s a rather schizophrenic situation in Africa today. Some ‘experts’ claim it’s necessary to release stop sending humanitarian aid and release the continent from its debts. I have my doubts bout this theory, as I do of paternalistic activism such as Bono’s. There needs to be greater honesty in examining the governments they’re working with, and why,” he added.

While Sleeping Sickness is clear in its intentions, its narration grows increasingly more confused as the film progresses. The arrival of Alex, an African character who grew up in France, adds even more confusion to the film’s disjointed dramatic pot, through to a ridiculous finale.

Sleeping Sickness is a German/French/Dutch co-production between A Komplizen Film Production, ÖFilm, Why Not Productions and broadcasters IDTV, ARTE and ZDF. International sales are handled by The Match Factory.

“The alienation of people living far from their roots”

The German director explains why in Sleeping Sickness he decided to focus on the subject of European expatriates working in development aid in Africa.

Ulrich Kölher dips into the troubled waters of European humanitarian action in Africa in the film which earned him the Silver Bear for Best Director at Berlin in 2011.

We sat down with German director Henner Winckler to pick apart A Voluntary Year, which he co-directed with Ulrich Köhler and which screened at Locarno

Review: In My Room

Un Certain Regard puts its faith in young talents 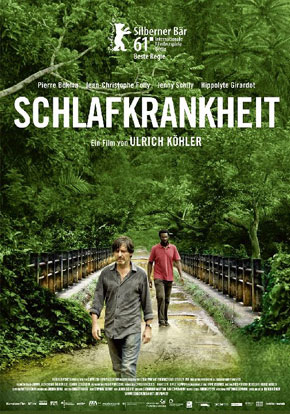