Tales Of The Night

30/06/2011 - An inspirational 3D journey into the space, time and traditions of the fairytale by French animation master Michel Ocelot. In competition at the Berlinale 2011.

The key is in the title: in Tales of the Night [+see also:
trailer
interview: Michel Ocelot
film profile], shown in competition at the Berlin Film Festival, Michel Ocelot plays around with the type of story he is most passionate about, in 3D of course, but with the greatest respect for the tradition, and it’s precisely that, let’s make no mistake about it, which gives rise to the fantasy element.

Moreover, inventiveness doesn’t preclude rigour, or careful research, as shown by the director of Kirikou & The Wild Beasts [+see also:
trailer
film profile] in the interludes between the six stories that his silhouette-form characters create and enact in a theatre of shadows whose colourful scenery is all the more striking for it (the device, previously used by Andersen, also quite mischievously gives a 2D appearance to this film which has, in reality, multiple dimensions).

Gleefully dipping into all the traditions of this oral genre, freely travelling in time and space, from medieval Bourgogne to Tibet, passing through Africa, Ocelot gives back to the fairytale the simple beauty (and magic at the same time, it’s perhaps the only magic that exists) of universal feelings it must express but also all the narrative complexity whose importance Bettelheim insisted upon. Besides stimulating the imagination, the numerous details and the multiplication (sometimes, but not always, by three) of the trials to be faced foreground the need to be persevering, to remain dreamy but morally unbending, practise good sense, so that the only things that matter – life and love – prevail .

Not that the film tries to dictate to its (young or not-so-young) viewers, quite the opposite: while the human values here are unchanging and uncompromising, the generous storyteller strongly encourages us to make up the story in our own way, to make the tale what we want it to be, to attach the faces we want to the black silhouettes, for example. This is what he himself does: "I feed (on stories), I get stronger, and then I do what I want", said the director at the press conference in Berlin. A very beautiful, sincere and rich light illuminates the "night" in Ocelot’s film.

more about: Tales Of The Night

Tales Of The Night

An inspirational 3D journey into the space, time and traditions of the fairytale by French animation master Michel Ocelot. In competition at the Berlinale 2011.

“Fairytales are my language”

Animation, stereoscopic 3D, the world of fairytales and the storyteller’s philosophy: in Berlin, the French director reveals the ingredients for Tales of the Night.

Produced by Nord-Ouest and Studio O, the next animated movie by Michel Ocelot will be co-produced by the film arm of the Franco-German channel

Rendez-vous with French cinema in London and Edinburgh

"Hollywood has no place in Thessaloniki," said Festival Director Dimitri Eipides, setting the mood for the 52nd Thessaloniki International Film Festival, which will be raising its curtains on...

51 avant-premieres to unspool at Paris Cinéma 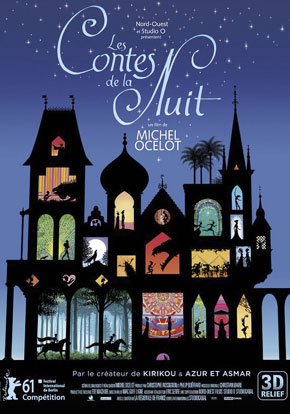