04/07/2011 - Claudio Cupellini’s second film is also his most accomplished. After earning Best Actor at the Rome fest for Toni Servillo, the film won the Cineuropa Award at the Brussels Film Festival.

Italian directors regularly find different idioms to cinematically explore the mafia crime which paralyses their country. In A Quiet Life [+see also:
trailer
interview: Claudio Cupellini
film profile], Claudio Cupellini tackles this subject by taking it beyond the Italian borders to rural Germany, a land of refuge for many Italian expatriates.

Fifty-year-old Rosario is an Italian immigrant among many others, leading a trouble-free life in the German countryside. A happy husband and father, owner of a hotel-restaurant, a citizen respected by his neighbours and employees, Rosario basks in this haven of peace he has built up in just fifteen years or so. But one day, two young Italians turn up at the restaurant and, confronted with his Mafioso past, Rosario has to make some choices that jeopardise his quiet life.

After his acclaimed performances in Gomorrah [+see also:
film review
trailer
interview: Domenico Procacci
interview: Jean Labadie
interview: Matteo Garrone
film profile] and Il Divo [+see also:
film review
trailer
interview: Nicola Giuliano
interview: Paolo Sorrentino
interview: Philippe Desandre
film profile], Toni Servillo once again displays a commanding charisma in a role which earned him the Marcus Aurelius Award for Best Actor at the latest Rome Film Festival. This slick story cleverly embraces the powerful codes of gangster-themed film noir, but this is coupled with a profound reflection on the family and the critical choices that punctuate life. While it blends familiar subjects with a barely concealed mystery, the script focuses less on a Camorra-style world (as was the case in Gomorrah) than it strives to examine the existential theme of the duplicity of human beings.

Leading a steady and settled existence, the character of Rosario is dragged back by the weight of his past and his heart suffers from the forced abandonment of a son, Diego, who returns to haunt him in his new family. Beneath his thuggish petty criminal attitude, viewers have no difficulty in sensing a dangerous naivety in Diego. The opposite is true of Rosario. This kindly paterfamilias hides a cold and calculating dark side, a survival instinct of which we never know if it is justified by his claims to protect his family or a deep cowardice brought on by an avowed fear of death.

Handled authentically, these age-old stories are still worth telling. They hark back to the essence of drama provided that viewers let themselves be swept along by the emotion expressed by the characters, who are all pitch-perfect.

Very European in its approach to language, A Quiet Life defines its characters according to their means of expression. Each one speaks a different language somewhere between Italian and German. Rosario’s German is almost flawless, but he is betrayed by an accent that is impossible to hide. His wife’s strained Italian reveals the limits of her commitment. One child is bilingual, the other doesn’t speak a word of German but talks in a thick Neapolitan that he shares with an accomplice who knows no other form of language. On the contrary, the animated discussions between Rosario and his Venetian chef are conducted in a purer language expressing the signs of a sincere friendship. Words possess a double significance, but as is often the case, it’s the unspoken that fills in the rest of the conversations: what we imagine, what we don’t know, what some understand even when the opposite is actually expressed.

A Quiet Life is a family story that goes well before it turns out badly. Cupellini’s second film is also his most accomplished, just sufficiently stripped of the often heavy-handed symbolism that the director likes to use. Here and there, there are still some superfluous passages. There is no real explanation for the explosion at the start of the film or the pointless detour in the script so that the main character can have a conversation with God. Moreover, a slightly slower pace in the third act seems to be due to some overly elliptical link shots, but the ending makes up for these imperfections like a net which closes the story and ties up its different strands. When the trap closes shut, Cupellini asks whether it’s worth escaping if it’s just putting off the inevitable, a temporary respite and not a true liberation.

more about: A Quiet Life

Claudio Cupellini’s second film is also his most accomplished. After earning Best Actor at the Rome fest for Toni Servillo, the film won the Cineuropa Award at the Brussels Film Festival.

Interview with Italian director Claudio Cupellini, whose film A Quiet Life has won the Cineuropa Award at the Brussels Film Festival 2011.

The new film from Claudio Cupellini, adapted from the graphic novel of the same name by Gipi and set in a post-apocalyptic future, is an ancestral, disturbing mirror of the present

Cupellini and Assayas supported by BLS 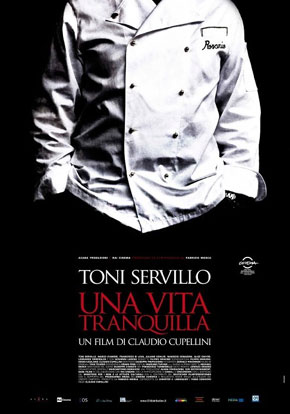