This Must Be the Place

28/07/2011 - Sean Penn is mesmerising as a depressive former rock star in search of his identity in this latest inventive film by Italy's Paolo Sorrentino, in competition at Cannes 2011.

The originality and talent that have always marked the work of Italian director Paolo Sorrentino have grown and widened in the remarkable This Must Be the Place [+see also:
trailer
interview: Paolo Sorrentino
film profile], presented in Competition at the Cannes Film Festival. Sustained by an incredible performance from star actor Sean Penn, this visually accomplished film blends the experimentation typical to Sorrentino’s style with profoundly rich subject matter.

The story is both a portrait of a depressed former rock star searching for his identity and a road movie that unfolds in the United States on the trail of a Nazi criminal. Sorrentino goes beyond his usual fascination for unusual characters and reveals his point of view of humanity, probing new territory, both physically (the American continent) and emotionally, without losing his genius as a director or his eccentric sense of humour along the way.

Resembling The Cure’s Robert Smith with his heavy make-up and big hair, and sporting the walk of an old man, Cheyenne (Penn) is a broken, bizarre man who lives in Ireland in a huge, empty mansion. He retired from the scene 20 years ago, following the suicides of two fans and has no desire to make a comeback, despite the fact that his fame, which he disdains, has not subsided.

The pop star drags himself to the supermarket and home, interested only, and barely at that, in following his wealth on the stock market. Dependent on his energetic and loving wife (Frances McDormand), this solitary man with a naïve gentleness, who is prone to senseless outbursts, gives off a pathetic, strange impression.

When he hears his ailing father is dying, Cheyenne sails across the Atlantic but arrives too late, but there discovers the secret of his father’s past as a concentration camp prisoner. Upset by the death of this parent with whom he hadn’t had any contact since his adolescence and mocked by a Nazi hunter who shows him some slides from the Holocaust, Cheyenne travels across America (from New York to Huntsville, Utah, passing through Bad Axe, Michigan and Alamogordo, New Mexico) in search of the Nazi with whom his father was obsessed. An investigation conducted with baroque methods will help him get to know himself, accept the past and grow out of his prolonged childhood.

Catching both his admirers and detractors off guard, Sorrentino adopts a more composed directing style in This Must Be the Place, diametrically opposed to the twists of his previous films. This fluidity that grows in the wide-open spaces of America is magnificently photographed by Luca Bigazzi, working with a filmmaker whose constant inventiveness has become a trademark that is sometimes overflowing and always stimulating.

Often entertaining, the film impeccably deals with the delicate subject of the Holocaust, without pathos and from angles that are both (excerpts of letters read off camera, the aforementioned slides) and iconoclastic (the Nazi hunter searching for millions of golden teeth and a very powerful ending).

Renewing himself on this journey across America, with a Sean Penn in a state of grace, in a European production shot in English, the audacious Sorrentino gives in to a new creative freedom and offers audiences a film that grows increasingly deeper as it simultaneously remains loyal to its eccentric rock’n’roll spirit.

more about: This Must Be the Place

“The film is a journey”

This Must Be the Place

“John Malkovich is the lay version of the Pope” 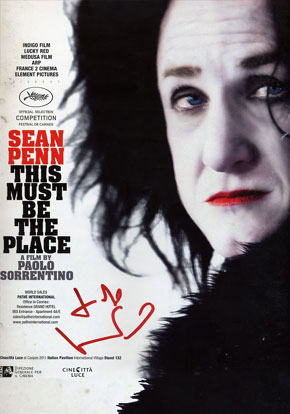