Attenberg [+see also:
trailer
interview: Athina Rachel Tsangari
film profile] is bold, passionate and gleefully odd. Those familiar with Dogtooth [+see also:
film review
trailer
interview: Yorgos Lanthimos
film profile] (2009) – another film from this group of talented Greek filmmakers – will see a kindred picture, but also one with a very distinct sensitivity to family, sexual awakening and death. One could potentially classify it as a coming-of-age picture, but this would be to deny Athina Rachel Tsangari credit for the diverse themes that work in parallel with Marina’s plot.

The film opens with Marina (Ariane Labed) being taught to French-kiss by her promiscuous best friend Bella. Marina is disgusted and puzzled, unable to see past the sheer ritual of the act - she has denied herself an education in love until the age of 23, despite her beauty, and it is her being out of step with the world that defines her and indeed the film. Both the character and Attenberg are touch perverse, and speak plainly without artifice.

Marina is clearly an outsider, with her anachronistic taste in the noisy 70s rock band Suicide and Françoise Hardy. In fact, much is done to show Marina and her father as being positioned in their own little world, away from mainstream ideas of culture, politics and social behaviour. The uniquely frank style of cinematography established in Yorgos Lanthimos's Dogtooth or the upcoming Alps [+see also:
film review
trailer
film profile] is continued by that film’s Greek cinematographer Thimios Bakatatakis who often frames a head out of a shot or refuses to pan and follow movement. We are invited to watch the action with the same eye as that of David Attenborough watching gorillas, a corruption of whose name gives us the title. Each tableau is almost medieval in its refusal to colour the mise en scène with pre-renaissance contrast or perspective. Attenberg is a film that blankly watches its characters, and invites the audience into the frame, asking them to watch with a pseudo-scientific eye.

But this does not mean that Attenberg po-faced or uninvolving – in fact, it is frequently hilarious. You will find some of the best dead-pan comedy seen on the big screen in years, if you like your humour dry and absurd. The father’s illness and death becomes a narrative strand with plenty of guilty laughs - for example he has clearly never tried to protect Marina from emotionally sensitive conversations and announces the preparations for his own cremation in a typically matter-of-fact way. Marina’s consequent dealings with the undertaker use the language of an awkward phone call to a shopping channel – the whole enterprise is cruelly funny. The father’s impending death gives a ticking clock to this dynamic and accelerates Marina’s education in a natural and heartbreaking way. The deserted industrial zone in which this strange family live is a ghost of failed social projects and broken dreams. His farewell to his daughter is also a farewell to the 20th century, something he calls “overrated”, leaving behind a century of unfulfilled promises, but perhaps escapes a century of further economic doom.

Tsangari allows middle age to be presented in tandem with adolescence, and Marina’s sexual awakening is explored in the form of a new boyfriend. As well as letting us see the two of them watch David Attenborough films together in bed – infantilising Marina - we are allowed to see the role-play games between father and daughter as they act out their animal fantasises. Their bodies contorted into convincing shapes, their faces fixed in the grimaces of the predator and prey. Theirs is a father/daughter relationship of unrivalled closeness. His death - coupled with her awakening - gives the film a bittersweet ‘She’s Leaving Home’ melancholy, stirring our collective protective emotions. As ever, the motif of the film: form pushing us away, content pulling us nearer.

Given that Attenberg was written in ten days during violent rioting in Athens, it is not overtly a political film. I do not see it as being allegorical, but rather as a strange, beautiful elegy to the mutual sense of loss known to all girls and their fathers.

Interview at Venice Days 2011 with the Greek director discovered at the Mostra 2010 with the bold film Attenberg and back on the Lido with actress Ariane Labed.

Bold, passionate, gleefully odd and much more than a typical coming-of-age film. Awarded at Venice in 2010 and finalist for the Lux Prize 2011.

Sarajevo competition to include Son of Saul, The High Sun and The Treasure 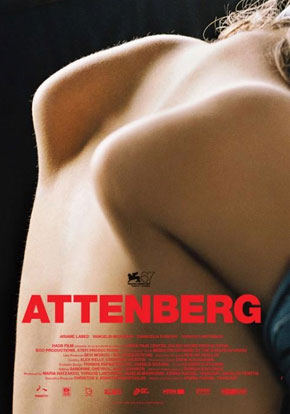