"Là-bas", over there, is how Africans refer to Europe. It means far away, somewhere else, where their relatives and friends go in the hope of finding a better life, an opportunity. One of the main destinations is Castel Volturno, about thirty kilometers from Naples, the “most African European city”, as Roberto Saviano would put it. Twenty thousand immigrants, of which half are clandestine. It was there that, on September 18, 2008, six young black boys were killed, randomly, by a Camorra commando: a warning to make it clear who ruled the area.

But since the criminal life is one also shared by many different joints, sometimes the peace held on the basis of the division of business and in some cases on the immigrants’ payment of “protection money” to the Camorra, can suddenly be broken. And those who will suffer are innocent people, exactly those who had chosen, in spite of everything, to continue to sell tissues and to lead a simple life, bound to their own traditions, and yet have found themselves on the site of a massacre at the wrong time.

Là-bas is an honest cross-section of a hushed reality, that of many immigrants with good intentions who turn to crime for lack of alternatives, the portrait of a desperate humanity that tries to get by. It’s a film played by amateur actors (the only professional is the beautiful Esther Elisha, forced into prostitution in the film), based on the stories of the penitents and of those who survived the massacre of Castel Volturno, as well as on the personal experience of Lombardi, with his past as official cameraman at African parties in the discos of Caserta’s hinterland.

Produced by Eskimo, Figli del Bronx and Minerva Pictures Group, in collaboration with the Campania Region and Rai Cinema, Là-bas does not yet have a distributor. "It’s not an easy film, with no well-known cast, spoken for the most part in French and English”, admits one of the producers, Gaetano Di Vaio. "We are very much counting on foreign distribution”.

more about: Là-bas: A Criminal Education

A shocking film about African immigrants in Camorra territory near Naples. Lion of the Future in Venice.

Là-bas, a Gomorra of the black community

Guido Lombardi's excellent debut, awarded at the Venice Film Festival 2011, and the future projects of a young, talented and brave author.

"Là-bas", over there, is how Africans refer to Europe. It means far away, somewhere else, where their relatives and friends go in the hope of finding a better life, an opportunity. One of the main...

Guido Lombardi brings the story of two family members’ sentimental education to the big screen, where a father and son reconnect after many years of absence and against a backdrop of crime

The new film by the Neapolitan director is a road movie, shot between Trentino, Campania and Puglia and featuring a father and son. An Indigo and Bronx Film production

Vieni a vivere a Napoli: An invite from Lombardi, Prisco and De Angelis

The director of Là-bas confirms his talent with a second film about five men carrying out a million euro robbery operation. Among the actors, Peppe Lanzetta and Salvatore Striano

Rome Festival goes back to being a celebration

The programme for the eighth edition was announced yesterday. Three Italian titles in competition including Guido Lombardi’s second film, as well as new films by Isabel Coixet and Nils Malmros

Filming kicks off for Take Five by Guido Lombardi in Naples

Second film for Là-bas director, this time telling the story of a fantastical robbery conceived by five men and their fragile ties. Among the main characters, Salvatore Striano (Caesar Must Die)

From Bellocchio to Garrone: ten Italian films in the running for nomination 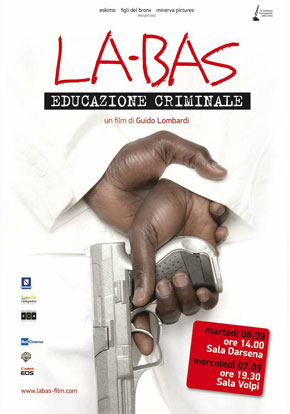