Juan Carlos Fresnadillo likes the extraordinary to erupt in everyday lives and shatter his characters. It happened in his previous films and it happens again in Intruders [+see also:
trailer
interview: Juan Carlos Fresnadillo
film profile], a suspense drama which explores the origin of fear.

The setting is Madrid and London. In the Spanish capital, a little boy suffers from regular nightmares involving monsters. His mother (Pilar López de Ayala) tries to comfort and calm him, and banish from his mind those anxious thoughts that keep him awake almost every night. But, during a storm, that threatening presence becomes very real, too real, and the woman has to resort to unethical means and call on a priest (Daniel Brühl) to resolve a (moral) conflict that is difficult to explain, understand or assimilate.

In Intruders, another story unfolds simultaneously in London, that city on the Thames. A man (Clive Owen) helplessly watches the deteriorating psychological state of his daughter, who insists there is a ghost in her wardrobe. John turns to hi-tech security measures and even to psychologists to find an answer, a solution to something which doesn’t seem real but, by entering his home, is undermining what he cherishes most: his family, his integrity, and his own emotional stability.

The two stories intertwine, are told alternately and complement each other. But how? Fresnadillo gradually, one by one, lays the cards out on the table, the pieces of the puzzle, so that the alert, worried, intrigued and expectant viewers gradually put them together and complete an enigma that is connected to those atavistic fears from which we all suffer and which we sometimes inherit from our parents.

Here, the director of Intact and 28 Weeks Later [+see also:
trailer
film profile] has ditched the plentiful location shots, the frenzied camerawork and the scores of extras feverishly running about in his previous films to offer us a psychological drama cloaked in suspense, with much more interiors, intense work on the acting and a certain claustrophobic tone, reminiscent of Polanski at his most obsessive. The film – produced by Apaches Entertainment (run by his great friend and collaborator Enrique López-Lavigne and the latter’s professional partner, Belén Atienza), Antena 3 Films and Universal Europa – is an ambitious €10m movie which doesn’t hide its definite commercial aims (along the lines of The Sixth Sense), but without sacrificing depth.

For, beneath this strict label of genre film, the Canary Island-born director, who was nominated for an Oscar for his short film Linked (1996), now looks at how our fears are rooted in ourselves, our personality and upbringing. These fears are a sort of mirror of the dark side we all have, even though it’s hard for us to accept this. "Intruders" explores the idea that fear of truth and pain ends up generating even more terrible, terrifying and damaging fears. Therefore this film, marked by the director’s fanatical devotion to fantasy, shows ghosts that have much to do with human nature. The characters in the film are faced with the uncontrollable, chance, destiny and the divine, as happened in the director’s previous two films.

In Intruders, Fresnadillo wonders what is the essence of ghostliness. And he tells us that it has to do with unresolved issues, which return time and again to our unconscious. Until they are resolved, they will keep on appearing, like the underlying image in a painting, or like some grey areas in historical memory. The director concludes that we must face up to the truth even though it may be very painful, because masking it leads to eternal suffering, like a very long chain whose links pass on their ghosts from one to another. Added to this are ambiguities and moral dilemmas similar to those seen in 28 Weeks Later, when a character came running out to save himself whilst leaving his wife to perish in a house bombarded by zombies. But such are the antiheroes of Fresnadillo’s films: men and women who are faced with the difficult situation of having to choose difficult paths because they have no other choice, because they have to choose an option. In the end, it’s about mastering destiny and not being in the hands of something that can’t be controlled, whether this takes the form of a ghost from the past, fear of the new and the unknown or frequent insecurities. And in Intruders, the whole of this message comes wrapped up in pure entertainment.

A game of parallel clues, shooting in two languages, and a passion for the psychological mechanisms of fantasy: the Spanish director talks about Intruders.

Spanish cinema increases its market share, but is still below potential

Viard shines in On Air

Spanish cinema triumphs at home; Almodóvar does well in US 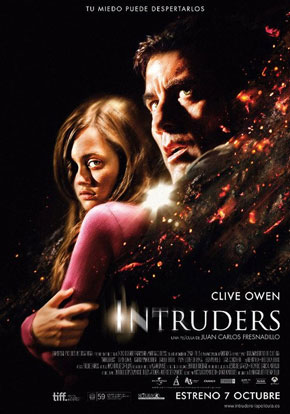