18/10/2011 - Political power analysed in a fast-paced thriller. Olivier Gourmet gives a magnificent performance in a film unveiled at Cannes.

“You’re not here to change the world, but to earn those five poll points we’ll lose,” Minister Bertrand Saint-Jean is told by the head of the French government, who gives him a promotion and a warning: “If we don’t take advantage of the gifts the gods place in our path, the gods could exact revenge”.

With The Minister [+see also:
trailer
interview: Pierre Schoeller
film profile], presented in Un Certain Regard of the Cannes Film Festival 2011, French director Pierre Schoeller has created a surprising, vibrant study of the cruel frenzy of politics, of the duties and the hectic work tainting the highest echelons of politics, and conflicts of conscious between general and special interests.

The film, which he begins with an upsetting and symbolic nightmare, centres on Bertrand Saint-Jean (Gourmet), who has been the French Minister of Transport for several months. One night he is woken by an emergency call and must head to the provinces, to the site of a fatal accident involving a school bus.

On the way back he breaks down and vomits, as his press officer bombards him on his media status and the benefits this situation can bring him, telling Saint-Jean, “You are non-identified politician… you have no image, your story still has to be written”.

The tone of the film is set in this first sequence. The minister, who is not yet familiar with the circles of power and has always been close to the people, is faced with an enormous dilemma: whether or not to accept the privatisation of stations that the prime minister wants.

A partisan of public service along with his cabinet secretary (Blanc), who turns out to be the real mind behind the minister, Saint-Jean takes part in raucous meetings with cabinet advisors, is constantly on the move in his government car, is always glued to the phone (sometimes two at the same time), entirely neglects his family and thinks he can sway the political powers that be in his favour. But he will have to make a choice.

A meticulous portrait of the daily lives of politicians and political games, which skillfully juggles the contrast between the minister’s frenetic activities and his sheltered world, The Minister is also the portrait of a lonely man – with “4000 contacts and not a single friend” – who can neither open his eyes to nor turn a blind eye towards reality.

Featuring numerous technical qualities – in particular beautiful cinematography and a sustained rhythm – the film succeeds in not favouring any one point of view and not excluding anyone.

Yet The Minister is certainly not a feel-good film, seeing as how Saint-Jean’s humanity has its limits and his political instinct is often accompanied by a yearning for government luxury at the expense of the less fortunate.

An unrelenting observation of the mechanisms allowing guarantors of public ethics to be seduced by deeply rooted private privileges, Schoeller’s film transforms certain dry, topical questions into a vibrant and incisive work. And marks another significant step forward in a career to be followed attentively.

more about: The Minister

A rising star of French cinema, the director talks about his second feature The Minister

Political power analysed in a fast-paced thriller. Olivier Gourmet gives a magnificent performance in a film unveiled at Cannes. 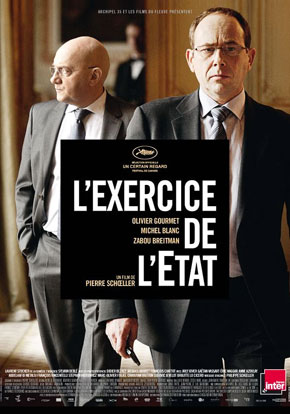