16/05/2011 - The misadventures of three teenagers left to their own devices. Sensibility and humour in a captivating film, unveiled in the Cannes Directors' Fortnight 2011.

The three children who play the lead characters in Belgian director Bouli Lanners’s third feature have no Peter Pan to guide them. Zak (Zacharie Chasseriaud), Seth (Martin Nissen) and Danny (Paul Bartel) aren’t yet 16 when, one summer, they find themselves alone, left to their own devices right in the middle of the Belgian-Luxembourg countryside. Penniless, the two brothers and their fellow down-and-out learn to face life like an adventure. They have no other choice but to cope like grown-ups, better than grown-ups, like giants.

A major winner with two prizes out of three in the Directors’ Fortnight 2011, where it screened as the closing film, The Giants [+see also:
trailer
making of
interview: Bouli Lanners
film profile] confirms the prominence of Belgian cinema at the Cannes Film Festival at awards time, but also and above all, it firmly establishes the talent of a director who has clearly forged a style of his own in the space of only three features.

While Ultranova [+see also:
film review
trailer
interview: Bouli Lanners
film profile] (2005) wasn’t free from the early flaws inherent in any film career, Eldorado [+see also:
film review
trailer
film profile]— another Cannes triumph in 2008 — quickly installed viewers in a comfort zone made up of themes that are dear to the director: the open road, the countryside, old cars and the substitute family that, in each of Lanners’s films, replaces dysfunctional blood ties.

Zak and Seth are brothers, but Danny, whom they’ve only just met, is straightaway included in their fraternal relationship. Danny’s real brother wants him dead and Zak and Seth’s parents are conspicuously absent. Never mind, in the course of an experience that turns them into three Saint-Exupéry-style Little Princes, the three rascals find refuge in the home of a motherly figure who also lives as a recluse in a countryside that muffles everything. Sometimes naturally contemplative, often silent, The Giants puts great emphasis on the silent conversations that are accompanied only by the melancholy strains (reminiscent of Radiohead at their best) of the score composed by Flemish band The Bony King Of Nowhere.

Lanners is also a painter and quite naturally he composes his film’s frames like paintings. The coherence of his artistic world is reinforced by his close involvement in the writing process which he shares with a co-screenwriter and dialogue writer. Not much happens in The Giants, but the film lingers wonderfully on those pivotal moments that steer a life in one direction or another. It’s up to viewers, however, to place their hopes or not in the future when Lanners lets his baby giants go off into the horizon.

It is worthy of note that the possible horizons that emerge ahead only exist above the river, the true continuous thread running through the film, those tranquil waters that the characters travel along like a path towards the future. They’re ill-equipped for the long journey of life, but the decisions they make on that small boat, the tacit complicity between those makeshift siblings, the metaphor of those little men rowing in the same direction, exude an optimism that is only found in the last line of fairy tales. They lived happily ever after.

That’s also what we hope for this co-production between Belgium (Versus), France (Haut et Court, also French distributor of the film) and Luxembourg (Samsa Film), which is distributed in Belgium by O’Brother and sold internationally by Memento Films International.

more about: The Giants

Nostalgia as a narrative driving force"

A coming-of-age tale, family rootlessness, the importance of nature: the Belgian director talks about his favourite themes at the heart of his third feature, The Giants.

The misadventures of three teenagers left to their own devices. Sensibility and humour in a captivating film, unveiled in the Cannes Directors' Fortnight 2011.

J Kessels: A writer in search of a story 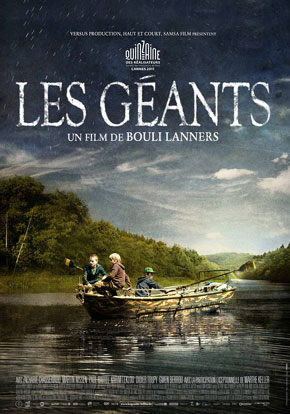