What is the main reason for this enthusiasm? The film is very funny and this fairy tale (which isn’t lacking in gritty elements) conveys positive values centred around friendship and the possibility of transcending limits (the money barrier, socio-cultural barriers, personal fears…). This melting pot, which has been the source of success for all the great comedies flirting with melodrama, particularly American ones, but also Italian ones (like Dino Risi’s Scent of a Woman), also bears the stamp of authenticity because the screenplay written by Nakache and Toledano was inspired by a true story that they discovered years ago in a documentary.

The unlikely encounter is a wonderful subject for exploring contrasts, but you still have to give them a riveting form. And Untouchable achieves this with Driss (Sy), a tall, sturdy young black delinquent from the tough suburbs, who wears a hooded sweatshirt and leather jacket and is a fan of Earth Wind and Fire, and Philippe (Cluzet), a very rich quadriplegic, who lives in a private mansion in Saint-Germain-des-Prés, and loves chamber music and Fabergé eggs. To everyone’s surprise, Philippe, feeling exasperated by the pity his disability inspires in others, hires Driss as his home help. Two people from two different social classes, who are not seemingly destined to cross paths, will thus discover each other and enrich each other’s lives, not without some often hilarious outbursts.

Extremely well scripted and paced, with an impeccable visual style, Untouchable, which is the epitome of a hit comedy, is the culmination of a work on the border between simplicity and caricature, a combination much less easy to concoct than it appears. The film also puts the spotlight on Quad Productions (Nicolas Duval Adassovsky) after the excellent results garnered in France and abroad by Heartbreaker [+see also:
trailer
making of
film profile]. And the adventures of the Driss-Philippe duo that Gaumont is launching in French theatres on November 2 are far from over, because Italy’s Medusa and the Weinsteins have already bought the remake rights.

The Specials to be the Last Screening at Cannes 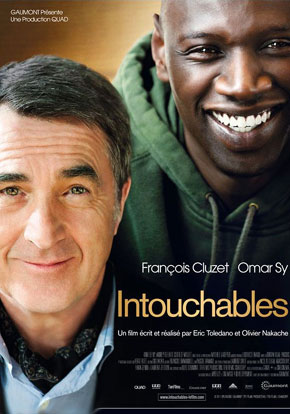