A Better Life [+see also:
trailer
interview: Cédric Kahn
film profile] is anticapitalist love story in the apocaliptic era in which the investment banks are blowing up Europe, and a financial expert is able to bring down a country as big as India. From macro to micro-economics, the main characters of Cédric Kahn’s film are on a quest for a happy future, as they live in a nightmare present, consisting of loans, infinite debts, a killer bureaucracy and institutionalised usury, all capable of destroying any possible romance and of separating people.

With suitable close-ups and without complacency, Kahn captures the main character Yann, played by director-actor Guillaume Canet, a bourgeois face which here transforms itself into a thirty-five-year-old cook who wants to be emancipated, make a leap in social standing, create a job for himself which doesn’t involve any bosses, social security, without the fear of coming up against a harsh reality, because he, who was born in a foster home, knows life well in all its harshness.

The director follows him through a ruthless Paris, a mirror of a Europe that is collapsing, inhabited by illegal immigrants whose future hangs in the balance, the new poor who aptly convey the idea behind the Occupy Wall Street slogan: "we are the 99%". Yann meets Nadia (Leïla Bekhti), a twenty-year-old Lebanese waitress with a 9 year-old son, Slimane (Slimane Khettabi). The two fall in love immediately. They want to open a restaurant together on the outskirts of the capital. Their financial situation sends them into a vicious spiral of financing. Yann, who is strong-willed and impulsive, pursues his dream of small businessman and gets into increasingly greater debt, whereas Nadia, who is more pragmatic, decides to sacrifice herself and leave for Canada, towards a more secure job, putting her son into the care of her partner with the promise of soon sending a plane ticket so that he might join her.

Cédric Kahn gives us realist insight, dramatically relevant to our times, describing the mechanisms of debt, the risks hidden behind revolving cards and at the same time he makes us aware of Yann’s integrity, his total honesty. The man forms a strong bond with the boy, trying to teach him the moral values needed for a life in that jungle of exploitment. He himself will for a moment disregard his own rules, if only to try and provide a future for his "family", and goes to Canada looking for the woman who has not sent her news for months.

During the second part of the film the rhetoric takes on an almost necessary urgency, and the script, written by Kahn together with Catherine Paillé based on the novel Pour une vie plus douce by Philippe Routier, is a little weaker. But the great solid directing and Guillaume Canet’s performance convey the narrative’s urgency and support the film right until the apparent happy ending, when Une vie meilleure seems to want to give and answer to that initial hope. One has to start from the beginning, revisit one’s aspirations, rebuild one’s values, discover and savour happiness even in poverty. And keep on dreaming.

more about: A better life

“You mustn’t accept misfortune as fate”

Excessive debt, family, love, survival: the French director explains the reasons that drove him to make A Better Life.

The first clapperboard is about to slam for the film by Hervé Mimran, which is being staged by Albertine Productions and sold abroad by Gaumont

The winner of the Golden Bear for Best Short Film at Berlin in 2013 will shoot his feature debut in June; the Geko Films production will be sold by Alma Cinéma 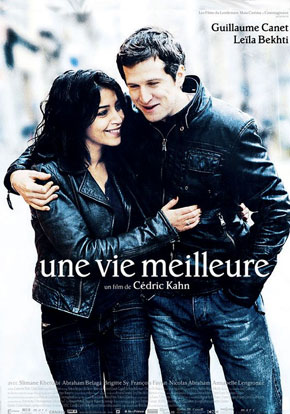