Television and On-Demand Audiovisual Services in the Russian Federation

The Russian Federation is currently implementing digital terrestrial television in the framework of two important Federal programmes. 4 phases of transition by region are planned. The Implementation of the first phase, which began with the Far East regions and southern Siberia, started in 2010, and has now been completed successfully. The deadline for the analogue switch off is set for 2015br>
The planned programme budget is 127 billion RUB, i.e. about 3.8 billion USD (current exchange rate). Of this amount, it is planned to draw 80 billion RUB from the State budget, and the rest from extra-budgetary sources. The main area of expense of about 60 billion RUB will be the construction of digital terrestrial television networks. This includes the modernization of the Russian TV and radio broadcasting network (RTRN) - replacement of some existing antenna mast structures and the construction of new ones, replacement of transmitters with those suitable for digital broadcasting. The programme objectives are to provide up to 100% of the Russian population with multichannel broadcasting with the guaranteed provision of nationwide public television programmes of appropriate quality, as well as improving the operational efficiency of broadcasting.

The issue of transition to the new DVB-T2 standard in Russia has become especially relevant after the discussion at the meeting of the Government Commission for TV and Radio Broadcasting Development on July 7, 2011. The Commission supported the proposal of the Ministry of Communications on pilot deployment of the terrestrial network for the digital terrestrial television broadcasting standard DVB-T2.

Development of the pay-TV market

Meanwhile the non-terrestrial pay-TV market continues growing. According to J’Son and Partners, 32% of Russian households subscribe to a pay-TV offer in 2011 and the level should reach 42% in 2015. The development of pay-TV is mainly due to the activity of Russian satellite television operators (”Tricolor TV” and others) which offer a considerably low subscription price, with large and diversified packages. IPTV, a relatively new segment of pay TV, which has great opportunities for interactive services, is trying to enlarge its subscriber base while maintaining high prices for the access to the content. The number of Russian IPTV subscribers by the first half of 2011 reached only 0,7 million households which is 4% of whole pay TV base. The company “Rostelecom” which is actively developing IPTV in its inter-regional companies could change this situation: it is increasing the number of channels proposed, while adding free services and buying up programme rights. 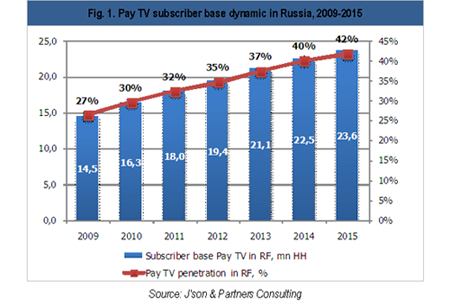 A considerable decline in sales of set-top-boxes was registered in 2009 but there was a gradual recovery in 2010. The total installed basis of set-up boxes will exceed the before-crisis level by 11%. 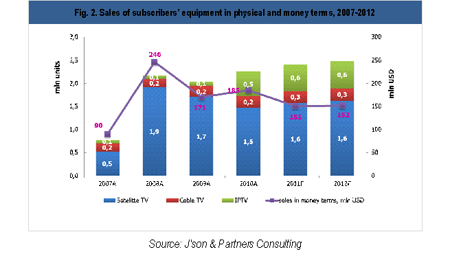 The development of the VoD market

IPTV became a starting point for non-linear TV closed systems development in Russia – “video on demand” services (VOD), the main business models of which are “pay per view” (PPV) and “subscription” (SVOD). Almost all major Russian operators of pay TV and also mobile networks offer services which allow viewers to choose a film from a general or thematic provider’s catalogue.

The difficulties in the acquisition of license rights to the content, the necessity for a consumer to make a double payment (to a provider to get access the content and for the film itself) make VOD services uncompetitive at the moment with a similar service in open systems – over-the-top (OTT), in which the content is available to any internet user: via connected TVs (for example Yota Play service), on video portals (including free ones such as Ivi, Tvingle, Zoomby), on mobile phones (Omlet.ru, Trava.ru). The new strategy of broadcasting assumes a transition from a one-to-one business model (“closed network – closed device”) to a many-to-many business model (“closed and open network – closed and open device”).br>
The exclusion of media service providers from the content supply chain makes the cost of the service considerably cheaper and provides an opportunity to admit more content producers to the market. This service makes it possible to obtain more information about consumers and also to lead effectively targeted advertising campaigns with high CTR. The TV development in social networks (social TV) which is already widely spread in the West will greatly contribute to this. Providers of interactive television services are adopting the strategies of interaction with Facebook and Twitter users, new interactive shopping services are appearing etc. The scale of the video viewing market promises positive perspectives for interactive services: at the moment in Russia there is one of the largest online video audiences: by June of 2011 there were 41 million people, while, for example, in Great Britain about 34 million and 40 million in France.