A whiff of scandal often accompanies the representation of sexuality in film and Malgorzata Szumowska’s Elles [+see also:
trailer
interview: Malgorzata Sumowska
film profile] won’t escape this cinematic law of desire. By tackling the subject of prostitution among female students (a rapidly growing phenomenon) whilst broadening it out to the theme of women’s status, the Polish director runs the risk of not pleasing everyone. But with the screenplay (co-written by the director with Danish screenwriter Tyna Byrckel) aiming to eradicate prejudices regardless of "political correctness" and puritanism, the "disturbing" Elles perfectly achieves its aim, giving viewers food for thought.

Carried by Juliette Binoche’s performance and by some top-quality directing, the fourth feature by Szumowska (who attracted attention at Sundance and the Berlinale in 2005 with Strangers [+see also:
trailer
film profile], and won the Special Jury Prize at Locarno in 2008 with 33 Scenes from Life [+see also:
trailer
film profile]) confirms the talent of a director who is skilled at opening up multiple avenues of interpretation without imposing any judgements.

The film traces a day in the life of a Parisian journalist who is in the middle of writing a report on student prostitution whilst managing her family life (a dinner to prepare, two sons and a relationship to handle). Interspersed with interviews and memories in flashback of two female students who have become independent escort-girls (Anaïs Demoustiers and Joanna Kulig), the story gives a detailed (and very crude) portrayal of their experiences in the world of sex for sale. And to the journalist’s surprise, what is revealed is a calmly accepted "normality” ("I’d do the same thing with my boyfriend", "the only difference is that they’re all old enough to be my father", "I thought I would get screwed for hours, but they tell me about their little lives") coupled with acute materialism ("I was very lucky. After a month in Paris, I had a gorgeous apartment"), with everything speeded up by the Internet ("it was easy, I placed an advert and in no time at all I had 50-60 emails"). Fuelled by a secret desire for upward social mobility or housing problems, money seems to be the only driving force for a generation of very sexually uninhibited girls, who are poles apart from their families in this respect (Krystyna Janda plays a mother dismayed by the contents of her daughter’s cupboards).

Shaking up received ideas about prostitution (from the very particular angle of escorts) and the perception of the girls as victims, Elles nevertheless avoids the pitfall of complacency in one shocking scene whose sexual violence puts into perspective the previous scenes (taboo-free eroticism, comforting escort, romantic client…). But it is mostly through its handling of the journalist’s personal life that the film enters into a more subtle social dimension. Subtly, Szumowska depicts a microcosm where communication has broken down with a husband (Louis-Do de Lencquesaing) who is constantly on his mobile phone, an elder son in the middle of a teenage crisis and a younger son glued to his video games. This couple whose relationship has deteriorated and who are overwhelmed by their educational role echoes the hyper-individualistic life path of the young escorts, gives Juliette Binoche’s character an unpleasant reflection of her personal situation (ageing, loneliness and waning sexuality) and makes viewers reflect on their perception of the changes in contemporary social life. This broadened point of view is handled by the director with a fine skill for framing (with a special mention for the medium close-ups) and lighting, sharp editing and some much-needed breathing space in the form of outdoor scenes (an interview in a park). At the same time, the film also sketches a portrait of freelance journalism work ("I’m prepared to pay what you want, your name won’t be mentioned, it’s a good deal for you"), a further reflection of what is, in reality, the focus of Elles, far beyond the steamiest scenes: the modern world.

"Making an impact on mentalities that have gone to sleep"

Juliette Binoche to chair the jury of the 69th Berlinale

Memento Films International plots a course for the EFM 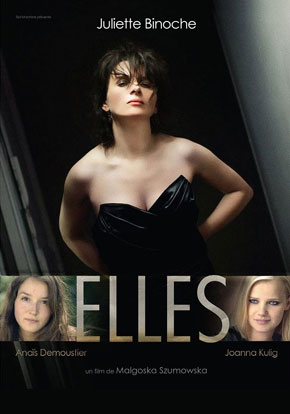 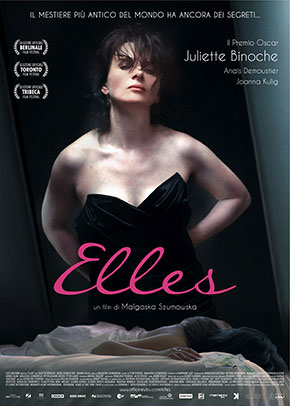