An important event. The yearly masquerade ball at the Morrison’s Hotel in late 19th century Dublin. Guests dance, drink and have fun. The impeccable staff are concentrated on their work. Doctor Holloran (Brendan Gleeson), a permanent guest of Mrs Baker’s (Pauline Collins) hotel, is already drunk and with his stethoscope round his neck he goes up to the stiff, proper-looking waiter Albert Nobbs (Glenn Close), tight in his black livery. "We are both disguising ourselves from what we really are", he whispers ironically in his ear. The doctor can’t even imagine how far from the truth this is. The waiter is a woman, abandoned at birth and forced into disguise in order to survive in an Ireland of extreme poverty.

Nobbs guards his secret closely. When Mrs. Baker employs Hubert Page (Janet McTeer) to repaint the hotel’s walls, Albert is forced to share her bed with the stranger and discovers that Hubert too is a woman in disguise, for the same reason. Hubert reveals that he is even married to a woman and this feeds Albert’s imagination: there is a way to redeem oneself from that pitiful existence...

Nominated for three Oscars (Best Actress, Best Supporting Actress for Janet McTeer and makeup), Albert Nobbs [+see also:
trailer
film profile] was Glenn Close’s thirty-year long dream, having played this character in 1982, in Simone Benmussa’s theatre production based on the short story by Ireland’s George Moore. Close wrote (with Gabriella Prekop and John Banville) and produced the film, which has some distinguished predecessors, since disguise is a constant in cinema, with several variations. To quote some famous titles: Some like it Hot, Psycho, Tootsie, Mrs. Doubtfire, Priscilla, The Queen of the Desert , Victor Victoria, Yentl. And some less famous: The Ballad of Little Jo, Fresh Kill, Le Sexe des étoiles, Dream Girls and the recent Tomboy [+see also:
film review
trailer
interview: Céline Sciamma
film profile]. Stemming from classic Greek culture, the plays of the Middle Ages, Elizabethan and the Japanese Kabuki Theatre, disguise was a cultural requirement which was then used in cinema to tackle questions linked to sexual identity.

And this is also true of Albert Nobbs, which is above all the story of a dream, the wish for a normal life. Albert wants to free himself from his job and buy a shop with his savings. But meeting Hubert Page also convinces him of the possibility of forming a romantic relationship. And his dream is far removed from reality when he is under the illusion that the young maid Helen (Mia Wasikowska), whom he is in love with, could become his legitimate wife.

A US-Irish production and directed by Colombia’s Rodrigo Garcia (Mother and Child [+see also:
trailer
film profile]), the film is measured, controlled, cautious and discreet, just like the waiter Albert Nobbs. It is the exact opposite of one of the director’s previous films, Nine Lives, winner at the Locarno Film Festival in 2005. But Albert Nobbs is essentially a film by Glenn Close, and that is how the great actress wanted to tell this unique story, which is simple and minimalist.

Distributed in Belgium since yesterday with IFD, Albert Nobbs will be in Italian cinemas on February 10 with Videa and on February 22 in France with Chrysalis.

A Long Way From Home: a romantic revival? 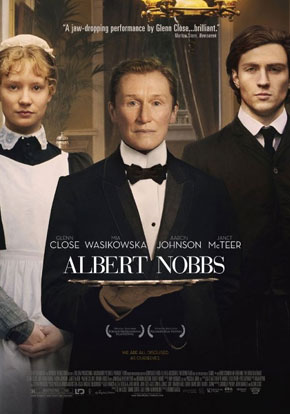