Magnificent Presence and ghosts on Google

12/03/2012 - Director Ferzan Ozpetek’s gay ghost story is a tribute to cinema and to the sublime art of acting. But it also underlines the importance of memory in a game of mirrors between past and present

Ferzan Ozpetek has moved. From the more working class Roman quarter of Testaccio, where he set his most important films, to the upper-class area, populated by ghosts, of Monteverde vecchio, where he shot Magnificent Presence [+see also:
trailer
film profile] , a film produced by Fandango and Faros Film with Rai Cinema, in cinemas from March 16 with 01 Distribution.

The title’s "magnificent presence" is the main character, Pietro, played by Elio Germano, a young Sicilian who has moved to Rome to pursue a one night love story and the dream of becoming an actor. Pietro is pure, a gay man "who finds it hard to be gay", as he admits himself to his dearly beloved cousin Maria (Paola Minaccioni). At night he works putting croissants in the oven of a bakery and during the day he goes to the infamous castings. Until he rents the second floor of an old building and starts seeing ghosts. They are also actors, but in a theatre company from the 40s, who died in tragic circumstances… In a reversal of logic they are not aware of being dead (as in The Others) and in their eyes the "presence" is in fact Pietro.

After his slip with A Perfect Day [+see also:
trailer
film profile] in 2008 and the success of the family pastiche Loose cannons [+see also:
trailer
film profile] in 2010, Ozpetek tries once again to marry drama and light-heartedness, as in his most successful work, Ignorant Fairies (2001), but widening the horizon as far as the eye can see (for the viewer).

In fact Magnificent Presence would merely be an original gay ghost story on the pride of diversity (Elio Germano’s definition) if it weren’t for the fact that the film tackles subjects as deep as the importance of memory. Like the Davide - Massimo Girotti from Facing Windows (2003), a homosexual Jew who escaped the house to house searches and deportations of 1943, the ghosts in the Magnificent Presence have been victims of Nazi-Fascist persecutions.

Under this narrative guise, the director from Istanbul’s film is nothing but a tribute to cinema (the "magnificent presence" of the present-day imaginary world) and more generally to the sublime art of acting: ghost from the Greek phantázein, to show. More than "Six Characters in Search of an Author", Luigi Pirandello’s most famous drama, which the screenwriter Federica Pontremoli says inspired her, what springs to mind is a beautiful film from 1961 directed by Antonio Pietrangeli and written by Ennio Flaiano, entitled Fantasmi a Roma. There too there is a group of ghosts (Marcello Mastroianni, Sandra Milo and others) who live harmoniously with an elderly prince (Eduardo de Filippo) in an old patrician building in central Rome.

But in Magnificent Presence there is a game of mirrors between present and past which makes it eerily modern: Pietro searches on Google and shows his spectral friends the summary of their event from over 60 years earlier.

Stars Margherita Buy, Vittoria Puccini, Beppe Fiorello and Cem Yilmaz (very famous actor in Turkey) readily lend themselves to slightly ‘transparent’ parts, while the more ‘substantial’ parts are played by the protagonist Elio Germano, who is yet again put to the test and passes with flying colours, and the co-protagonist Paola Minaccioni, who has freed herself from TV gags and purely comical acting. Intermittent cameos from director Daniele Luchetti (playing himself) and Mauro Coruzzi, aka Platinette, in a Felliniesque scene which is completely superfluous to economy of the film but is visually very powerful: the charismatic transvestite Badessa greets Pietro in an underground dressmaker’s where tens of transvestites are sowing hats.

more about: A Magnificent Haunting

Onda su Onda will be shot in Uruguay and will star the director and Alessandro Gassman. It is produced by Indiana Production and is due to be released in February 2016 by Warner Bros Pictures

Today sees the release in cinemas of the second work by Giorgia Farina, a black comedy that made its global debut at the Bari International Film Festival (21-28 March)

A total of 14 Italian films in Tokyo

During the training held by the Cinema and Ausiovisual Centre for French-speaking Belgian film professionals, a review of new, off-the-wall ideas that have been used to promote and distribute...

The Fifth Season arrives at the heart of the summer

Unveiled in Venice, the film by Jessica Woodworth and Peter Brosens is launched by Equation. Also on screens, the competitor from Berlin Gold

After Viramundo, the experiment of pan-European and multi-media releases continues with Magnifica Presenza by Ferzan Ozpetek

Three girls with a gun in Amiche da morire 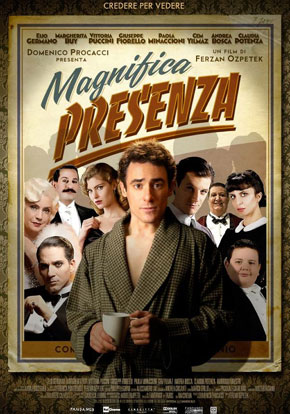