20/03/2012 - Romance, intrigue, and tragedy in the Danish court in a time of struggle between progressives and conservatives. Best Actor and Best Screenplay in Berlin.

With his fourth film as director, the Danish Nicolaj Arcel proved once again, with his Berlinale’s in competition, A Royal Affair [+see also:
trailer
interview: Mikkel Boe Følsgaard
interview: Nikolaj Arcel
film profile], that he and Rasmus Heisterberg are a brilliant pair of screenwriters. (They are also to be applauded for the international success of Millénium).

After the adaptation of King's Game about power struggles in a contemporary context, Arcel has now adapted Bodil Steensen-Leth’s novel to retrace the love story at the end of the 1760s between Caroline Mathilde (Alicia Vikander), the Danish queen of English origin married as an adolescent to the cyclothymic and debauched king Christian VII (Mikkel Boe Følsgaard), and her husband’s doctor, German progressist Johann Friedrich Struensee (Mads Mikkelsen). Between its classical debut and its tragic but modest conclusion, A Royal Affair also tells of how Struensee used his influence over the king to free Denmark of cruel medieval archaisms to bring it into the era of the Enlightenment, as least for a while.

The film’s success lies in it transcending the costume drama genre with both audacious and spiritual dialogues and situations, often highlighting the king’s excentricities - as well as his lust, as Arcel does not hesitate to explore the sexual motif of the film’s title, especially in the first part, before a conspiracy worthy of Julius Ceasar treacherously puts end to what seemed to be too good to be true.

The king’s whims indeed give way to quite succulent scenes, such the king and Struensee exchanging Shakesperian quotes, or the Council of State meetings in which the king dares more and more to intervene, suggesting for example that his dog be made an honorary member, or that empty carriages drive around Copenhagen at night to bring lost drunkards home, an extremely modern idea that reflects the drastic change installed by the visionnary Struensee.

The latter’s finesse is another of the film’s delectable ingredients. We find this just as much in the way that he uses his wit and necessarily discreet eye contact to become closer to the queen, as we do in the way that he successfully persuades the king of everything. Struensee notably persuades the king that to prove wrong those who believe him to be mad, he has to do what he loves doing the most, take on his role of king as if he were an actor, instead of really taking on its responsability.

Despite usurping the king’s power and seducing his queen, the humanist Struensee not once flounders in his protective friendship for the king, so that A Royal Affair is not a story of adulterous love and treachery, but rather, as we see when our three main characters sit hand in hand, an incontestably successful portrait of a modern political and love triangle, both sincere and paradoxally devoid of disloyalty in a world of Brutus and Cain.

more about: A Royal Affair

Interview with Mikkel Boe Følsgaard, winner of the Best Actor Silver Bear for his role in A Royal Affair

“I am mostly proud that we didn't fail”

A new, international Hamlet is in the works

Green Film Shooting: The green gate to the world 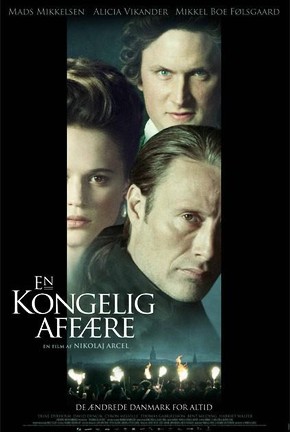