In the style of a colonial film from the 1960s shot in 16mm, the prologue of Tabu [+see also:
trailer
interview: Miguel Gomes
interview: Miguel Gomes
film profile] by Portuguese director Miguel Gomes (Our Beloved Month of August [+see also:
trailer
film profile]) tells of how a crocodile became inconsolable after having gobbled up an explorer tragically in love, and already in this beginning we see all the ingredients of this delicious film: its grain, its choice of black and white, its themes, its intelligence, its love of film, and finally its slap-stick humour that always wants to suddenly impose grotesque elements in situations initially approached as tragedies.

The first part of the film, named “Lost Paradis”, is set today and revolves around three elderly neighbours whose names suit them: there is the pious and charitable Pilar (Teresa Madruga), whom can be counted on to pay attention and to come running when she is needed, the devoted Santa (Isabel Cardoso), a woman of colour probably originally from a Portuguese colony who lets herself be treated as a housemaid when she is not being accused of witchcraft or tyranny, and the widow and and abandoned mother Aurora (Laura Soveral), towards the end of her life. It is especially Aurora that the two others always have to come to the rescue of, as she ruins herself in casinos, drawn there by strange dreams populated by hairy monkeys - an irresistable call even if she is aware that dreams and reality are two different things, for if she weren’t it would be different. When she is urgently taken to hospital, not before having asked Santa to look after the crocodile, she utters her wish to see a certain Gian Luca before she dies. (When Santa asks which crocodile, she says the question is absurd because there aren’t fifteen of them!)

In the second half of the film, we set off on an adventure 50 years before with Mr Ventura, him also very well named, in the farm that the departed Aurora used to own in Africa at the foot of a certain Mount Tabu. In this paradise, Aurora (who, young, has the delightful features of Ana Moreira) lives a very dreamy reality. This is shown through silent images, with the exception of the jolly musical passages that retrace her incredible biography, to the voice of our narrator (played in his youth by the devastating Carloto Cotta, with his Gérard Philippe moustache). However, as this very colourful black-and-white story carries on, we discover why the young woman who exported ostrich feathers, briefly became an actress, and was a dedicated hunter of large game, had to give up this idyllic life to forever keep with her the secret of a tragic love story, like a large crocodile at the bottom of her heart.

Whereas the endearing The Artist [+see also:
film review
trailer
interview: Michel Hazanavicius
film profile] continues to conquer Mount Hollywood, Tabu deploys its roots it a whole new type of earth to give silent cinema the most authentic of tributes, because the film does not parody silent cinema but rather captures its spirit. In short, Tabu infinite originality strikes you from the very beginning. Gomes’ film does not resemble anything recent in cinema, nor anything else for that matter.

After winning the Alfred Bauer Prize at the Berlinale, Portuguese director Miguel Gomes' third film, Tabu, is now a finalist for the European Parliament's LUX Prize.

The Portuguese director saw his third feature Tabu competing for the Golden Bear at the 62nd Berlinale.

The Fall grabs the main prize at Vila do Conde 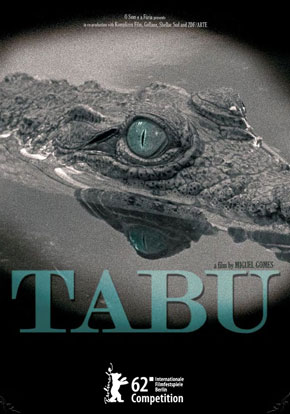