09/05/2012 - A new masterly work by Jacques Audiard who adds poignant melodrama to his realist and violent universe of social film noir.

Diving as usual into the great depths of a society that he observes frankly, Jacques Audiard this time orchestrates a astounding love story with echos of the Beauty and the Beast, striking the iron of his extremely well-mastered intensity on the friction point between brutal force and extreme fragility, between animality and humanity. In this cruel furnace where seduction needs no serenade, where blood, sweat, and tears flow, where the density of fatality is pierced through by bolts of drama, however appears a slither of light, a very rigid, narrow path towards redemption, compassion, love, and liberation. It's an initiatory path that Jacques Audiard has already addressed in his films, but very rarely from a man-woman angle (except in Read My Lips), and never with such melodramatic combustion, as the heroine of Rust & Bone loses her legs (a handicap far more serious than the prophet's illiteracy or Emmanuelle Devos' deafness in Read My Lips [+see also:
trailer
film profile]). However, through the most poignant emotions, it's still about a fight, a return to the surface in the form of survival, a struggle to adapt in a hostile environment and to face one's demons. It's a journey that shatters the mirror of appearances through the meeting of two very strong characters on a captivating screenplay by the director and Thomas Bidegain based on the short story collection by Craig Davidson.

Ali (Matthias Schoenaerts) is an abrupt, frustrated force of nature, who rummages through rubbish to find food on the train that takes him down south with his five-year-old son, of whom he knows not even if he went to school when he lived with his mother ("When they went to Amsterdam, they used to take the little one to pass on the dope"). Put up by his sister (Corinne Masiero), a check-out assistant in a supermarket, he finds work as a bouncer and, in a night club, fleetingly crosses paths with Stéphanie (Marion Cotillard), whose profession is training orcas, a rather dominating character who, to him, is "dressed like a whore". But after a "work" accident (fascinating aquatic sequence at Marineland), the young woman loses both legs, and she gets back into contact with Ali a few months later. He will help her to rebuild herself psychologically, and will bundle her off into the wild world of underground "free fights"…

Touching upon many themes such as performance, violence, money, education, preconceptions, solitude, and fear, Rust & Bone brings out, from their existence in the shadows and emotional and economic misery, beings condemned to eat expired products and whose any mistake is stalked by illegal cameras. It's a world of pain and ordeals, in which life and death fight over souls, where love and trust struggle to bloom. From this tenebrous decor, Jacques Audiard extracts a fascinating work and a drop of optimism, to an expert mise-en-scene that is almost hand-crafted, and the mark of the greatest.

"A love story in this universe of the downgraded"

“A love story in this universe of the downgraded” 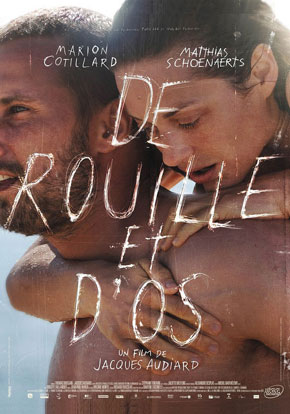