Who's white and who's black in Paradise: Love?

Austrian film director Ulrich Seidl is back in the Cannes official competition five years after screening a film that was already radical, Import/Export [+see also:
trailer
film profile]. Since his last film, Seidl has been shooting not one but three films, starting with Paradise: Love [+see also:
trailer
film profile], the first instalment in a trilogy - Paradise: Faith and Paradise: Hope will follow - about three woman from the same family each with the same deep-rooted desire to find happiness elsewhere.

Teresa is an Austrian woman in her fifties whose corpulent shape hardly inspires physical acrobatics. On holiday, she acts like a "sugar mama", another European woman on a Kenyan beach helping herself to young local males ready to prostitute themselves in all sorts of ways for a little money. Teresa is looking for love, but instead she is increasingly disappointed as one "beach boy" replaces another. She uses these men and they use her in return, but we are far here from any give-and-take relationship. Instead, very fast it becomes bilateral abuse, and Seidl knows how to show these excesses in all their pathetic vulgarity, almost as if it were a documentary. With the notion of respect for the other obliterated, nobody is white or black, and paradise distances itself from the notions usually associated to it: happiness, freedom, love, sex...

In Paradise: Love, professional actors act alongside amateurs for more realism, but the film often borders on ambiguity, especially as far as its message is concerned. When the director crudely films a real beach boy being used by actresses during a long birthday scene, some could accuse him of a form of abuse, of the same excess that morality would have required him to denounce more clearly. But Seidl doesn't share this opinion: "In Kenya, whether you want it or not, everything is about money. A white European is considered to have money and is treated in consequence." Often, the director's point of view stays on one side of the rope that divides tourists from locals on the film's Kenyan beaches. This is probably, in itself, a way of denouncing the tourists' simplistic viewpoint. "There Europe, here Africa," calls out an African on the other side of the rope, but already it is dishonest, because even when the film advances more into the daily lives of these small-time gigolos, their scams, and only their scams, are shown to us.

Unlike Laurent Cantet who breached the same topic in Heading South [+see also:
film review
trailer
interview: Laurent Cantet
interview: Robin Campillo
interview: Simon Arnal-Szlovak
film profile], Ulrich Seidl allows himself moments of pure comedy, slapstick humour but also funny, cynical or racist, dialogues that help him to define his female characters. The dialogues are mostly improvised so that the audience cannot tell the professional actors apart from the amateurs. These scenes fuel a crude film that captures unattractive female figures and sculpted male bodies in uncompromising, sometimes obscene shots. In many aspects, Seidl's methodology is close to an Austrian form of Dogma, as it involves shooting a fiction film as if it were a documentary. But we will not really be able to judge its intention until the trilogy is completed.

Nymphomaniac and The Hunt lead nominations for the 2014 Bodil awards

Ulrich Seidl at the Biografilm: 'My next film will be historical'

Little Lion : "a youngster in search of an ideal" 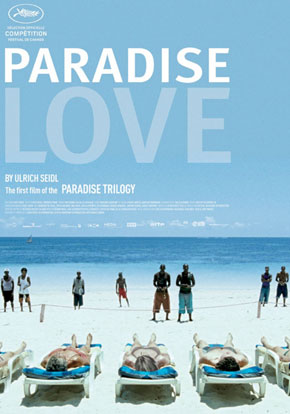