21/05/2012 - Thomas Vinterberg is back in the competition with his best film since Festen, a psychological drama about social fractures that never completely heal.

In the opening sequence of The Hunt [+see also:
trailer
interview: Thomas Vinterberg
interview: Thomas Vinterberg
film profile], Danish film director Thomas Vinterberg's latest film in the official competition at the Cannes Film Festival, a group of adults are enjoying the moment by throwing themselves naked into a lake in the middle of November. The scene emits a frank impression of hardy camaraderie, but it's a strong social bond that the director of Festen (Jury Prize in Cannes in 1998) will soon blow to pieces. This scene is not one from the previous world, and its disdain for any wariness of offence against public decency. It's a contemporary scene and this apparent carefreeness is only the thin outer shell of an egg ready to break under the smallest of impacts.

After a difficult divorce, Lucas (an impressively different Mads Mikkelsen) is busy rebuilding his life and his relationship with his adolescent son. He has friends, a family, and a job where he gets on well with everyone, but an almost fortuitous lie will suddenly spread like a streak of gunpowder and blow up a barrel of collective hysteria. Lucas is banished, denounced by all, and, humiliated, will try to save his dignity. He is alone against the rest of his community who think he is guilty of a vile act that he has not committed.

The film chooses not to maintain any doubt about its main character's innocence. For the audience he is innocent, and this initial premise will cause a powerful process of identification with the lie's victim. At this stage and throughout over an hour of film, the spectator can't possibly imagine how he will get out of it, because what psychoanalysts call "false memory syndrome" is a powerful and contagious curse that is especially dangerous in small communities. Very fluidly and wisely dosing his crescendo, Vinterberg lets his story evolve with formidable efficiency and credibility, even more so because it clearly holds echoes of similar events in real life.

From Mads Mikkelsen to the young Annika Wedderkop who plays Klara, via Thomas Bo Larssen as Lucas' best friend, all the roles are solidly written, played, and directed, according to the rules of the very best psychological dramas, those that never suffer from a drop in their rhythm. The Hunt is a tense film, with piercing scenes such as the climax when Lucas' son visits the supposed victim's family and the situation derails into a flash of traumatic violence.

The Hunt is a film about the power of lies ("I was talking nonsense, but no one will believe it wasn't the truth"), fragility, and the value of friendship ("We rode mopeds together"), but it also touches on the dangers of superstition ("Children always say the truth"). However, there is no outrageous moralising. Although the audience can see who involuntarily triggered the whole story, none of the other characters ever realise, and this character possibly doesn't even realise themselves.

In his best film since Festen, Vinterberg again, but in a very different way, highlights social fractures that never completely heal.

more about: The Hunt

“This project started with the landscape”

“Making films is all about compromise, but one of my duties is to find the right one” 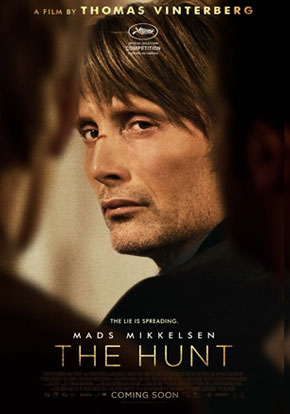