29/05/2012 - Ken Loach dives into the fountain of youth with a social comedy which is often very funny and less innocent than it seems.

A ray of optimism and good spirits shone on the competition of the 65th Cannes Film Festival with The Angels' Share [+see also:
trailer
interview: Ken Loach
film profile] by UK's Ken Loach (Golden Palm in 2006), an optimistic and funny comedy set against a backdrop of initiation to the cult of whisky. Without renouncing his favourite realist ground, the underprivileged lower classes, the 75-year old film-maker allows himself a very refreshing dive into the fountain of youth by relating the misadventures of four young layabouts who grasp an opportunity to change their lives. But this tale about a gift which fell from the sky and on the need to give a chance to delinquent youth whose social, cultural and economic horizons seem to be totally blocked, is less innocent than it seems. Because behind the several witticisms and gags which pepper the script, written by Paul Laverty, we find a message about the state of a society in which a barrel of whisky can be worth £1M, while some poor wretches go to Court for some fairly ridiculous crimes ("arrest the rapists, the serial killers and the wicked instead!").

It is precisely in Court that the viewer is introduced to Robbie (Paul Brannigan), the film's main character. An offender with a criminal record who has been charged for a violent assault, he escapes prison due to the fact that he is soon to become a first time father. Sentenced to community service, he meets youth worker Harry (John Henshaw) who takes him under his wing, which is what Robbie very much needs. Since his father-in-law, a night-club owner, hounds him with a deep-seated hatred ("It's too late for you, even if you want to change", "you're a loser", "what can you possibly offer my daughter?") and his men regularly try to beat up Robbie, whom he even offers money to go to London, leaving wife and child behind. Marked with a scar on his face, the young man is unable to land a single job interview as well as having to control an explosive temperament in the bitter environment of the Glasgow suburbs, where the scores are settled with knife stabbings, chains, bricks or bats. But on the birth of his son Luke, Robbie vows never to hurt anyone again, a promise which is confirmed in the tears shed during a karmic encounter with one of his former victims whom he caused to lose an eye.

Against this classic background, Ken Loach adds an immersion into the universe of whisky specialists to which Harry initiates Robbie and, indirectly, three other men sentenced to community service : Rhino (William Ruane), Albert (Gary Maitland) and Mo (Jasmin Riggins). A guided tour of a distillery (the 2% parts of evaporation are called "angels' shares"), a tasting class during a weekend in Edinburgh, self-teaching through reading and taste-refining sessions : Robbie soon reveals himself as having a very good "nose". And news of the next auction, in the North, of a barrel of Malt Mill, the Saint Graal of world whisky experts, gives him an illegal idea which he is going to put into practice with his three accomplices…

Not hesitating to use simple comic tools (there is no lack of swearwords and he is not afraid of "crude" humour), Ken Loach delivers a film which is often funny (and simply staged ) where the dark share (violence, social climate) gradually fades give way to this "angels' share" which has something of the Christmas Carol. A tale which is full of hope, where, to use the image of the drink which serves as the plot's guiding thread, improving one's fate has to go through different phases of fermentation (settling the scores of the past and accepting a present without a future), adding an ingredient (someone offers you an opportunity and you seize it) and distillation (creating your own path and your own life). All that before the stage of ageing in the barrel to create a product improved with age, as is true of Ken Loach's work in the areas of kindness and optimism.

"The point is not to make people laugh or cry"

“The televisual window needs to be reinvented"

A top-of-the-range line-up for Vertigo Media

Editorial: How digital is changing programming in cinemas 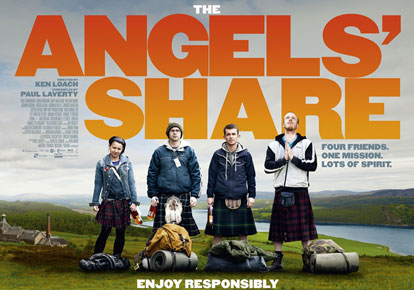