Heli: 'You will know hell'

16/05/2013 - For his first selection in competition, Mexican director Amat Escalante signs his name to a fascinating film, coproduced by the Netherlands, Germany, and France

Europe loves filmmakers from the rest of the world, and coproduces or produces artistically ambitious works from all the other continents. This trend is clearly showcased in all the various selections of the 66th Cannes Film Festival and perfectly illustrated by the competition's opening film, the very good Heli [+see also:
trailer
film profile] by Mexican director Amat Escalante (aged 34), a rigorous feature film making no concessions, with very beautiful formal mastery, coproduced by the Dutch company Lemming Film, French company Le Pacte and Unafilm of Germany.

We have seen a plethora of stories about “narco-traffickers” over the past few years, but they are quite rarely approached by directors with deeper visions than that of portraying straightforward gunfights dramatized to excess, or convoluted plots (in the style of Miss Bala). Drawing on the terrifying reality of Mexico, now well-known with its endless parade of drug trafficking, corruption, beheadings etc., Amat Escalante undertakes a subtle analysis of social processes and the impact of this toxic atmosphere on the young generation. Delving into the life of an ordinary family from a small town a few hours' drive from the capital with a quasi-documentary style, but directing with great cinematographic mastery, the filmmaker depicts a pitiless portrait of violated innocence, the endless cycle of violence and of life which continues despite it all, in an environment where death can rear its head at any time.

Heli (Armando Espitia) works nights in a car factory. He lives with his father (who works in the same plant), his wife and their baby, and his young sister Estella. His life can be summarized as going to work on his bike, working on the chain, going home, eating on the couch in front of television and attempting to make love to his wife who pushes him away (she would like to return to the region where her family lives). This theme of frustration, a source of disruption, is not insignificant, as the other protagonists in the film are paramilitary police forces who swing between the massive destruction of illegal products (22 tons of marijuana and seven of cocaine are burnt with great pomp and ceremony) and their own trafficking. A source of wealth which tempts Alberto (17 years old) who is studying (with great effort and humilitiation) in order to join the special forces. Because he is in love with Estella, it is in her house that he hides two packs of cocaine stolen from the traffickers’ hideout. Heli discovers the scheme and gets rid of the drugs, but it is too late. Masked commandos arrive, kill his father and take him, Estella, and Alberto away. After a scene of sadistic torture (administrated at times by teenagers who abandon their video games to try their hand in the real world), Alberto is hanged to set an example, Heli is released in pretty bad shape and Estella has disappeared. Life gradually goes back to its routine in a slightly paranoid atmosphere (fuelled by the police enquiry) until the moment Estella reappears, pregnant and mute…

With a very intense opening scene and punctuated by a few shocking sequences (but much less so than what the summary of the story might suggest), Heli is a film benefiting from superb direction. Fixed and reverse-angle shots play particularly well with the out-of-field, and slow movements of the camera stretch out the most striking episodes at an ideal pace. As a kind of slice of life of one Mexican family amongst many others, the film also gives much food for thought about the influence of images (TV, games) in a country where criminal chaos with invisible boundaries rules government departments, poisoning minds and giving the most mundane life a flavour of survival on the brink of hell.

"The characters might not be easy to understand, but they are always very convincing"

Copenhagen among The Untamed in Escalante’s new feature

Ida by Pawel Pawlikowski triumphs in Plus Camerimage 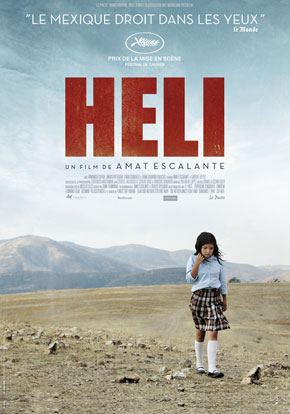