We thought that American director Jim Jarmusch (aged 60) had been a bit lost to the cinematographic cause since Broken Flowers (Grand Prix on the Croisette in 2005), but he has evidently found renewed energy in Europe with the British-German coproduction Only Lovers Left Alive [+see also:
trailer
film profile], discovered in competition at the 66th Cannes Film Festival.

Having demonstrated his ability to subvert genres like westerns with Dead Man (1995) or polished martial arts thrillers, as with Ghost Dog, the way of the samurai (1999), the filmmaker is now tackling vampire movies, a genre which has cyclically come back into fashion on the big screen since Murnau (1922) and Dreyer (1932) until the Twilight saga which has ignited the adolescent public over the past few years, not forgetting The Hunger (1983), Aux frontières de l’aube (1987) and Interview with the Vampire: The Vampire Chronicles (1994). This last title was based on the work by Anne Rice (the literary grand-master of the genre before Stephenie Meyer), and while Jim Jarmusch’s film is in no way officially connected to the novelist (the director has written an original screenplay), it is the one that has best managed to grasp the almost disenchanted atmosphere of vampires with regard to immortality.

Rock-stars of sorts who have seen just about everything, dressed-up in attire that sometimes goes back a few centuries, the two main characters, Adam and Eve (the film is full of this kind of witticisms) played with talent by Scottish actress Tilda Swinton and British actor Tom Hiddleston, live their vampire lives in the 21st century: they do not kill anyone anymore and find fresh blood by corrupting hospital staff. Eve lives in Tangier and Adam in the greater suburbs of Detroit. The latter, a music and science lover, is a music star who does not give concerts, but lives an inaccessible life as a hermit in a house filled with incredible bric-à-brac; he is linked to the outside world only by a dealer who brings him collectable guitars which he adores. As for the nature-lover, Eve, who has survived for much longer in the world of humans (referred to as "zombies", who contaminate the world’s water and blood), she has developed several gifts, including the ability to date objects by touching them and seeing the future of human beings.

Since Adam is depressed by this endless life, Eve comes to Detroit, by plane and by night, to comfort the one she loves (they got married three times already over the centuries). But the arrival of Ava (Mia Wasikowska), Eve’s sister, a vampire who is incapable of resisting her thirst, will turn the couple’s routine upside down, forcing them to leave the United States for Morocco where they are awaited by their “blood brother”, Marlowe (John Hurt). But an unpleasant surprise is also waiting for them...

Alternating indoor scenes filled with suggestive visual details with nocturnal escapades in the narrow streets of Tangier or by car in a completely deserted and abandoned Detroit (Michigan theatre, Packard factory), Only Lovers Left Alive elegantly plays the card of cultivated humour filled with literary references (Shakespeare, Byron, Faust, Shelley, Mary Woolstonecraft) and scientific ones (Fibonnaci, Tesla, Einstein, etc.), so many names that actually crossed the lives of the protagonists. Filmed on a detached fake rhythm notably including very some fine shots focusing on the movements of the characters in harmony with the rotation of Adam’s vinyl records and tapes, this 100% European feature film by Jim Jamusch treats itself to a relatively humoristic playground, invested with real charisma by Tilda Swinton and Tom Hiddleston. In this trip in which the quenching of the thirst for blood somewhat resembles heroin addiction, the filmmaker uses his camera with highly controlled nonchalance and delves in particular into the world of music (William Lawes, Eddie Cochran, Charlie Feathers, Jack White, the Motown and Stax record labels, Charlie Feathers etc.) of which he is so fond, signing a vintage work about passing time and the marks left behind by artists, rather like vampires of eternity.

more about: Only Lovers Left Alive

Thessaloniki fest to open with Jarmusch’s Only Lovers Left Alive

The international film fest is gearing up towards its curtain-rise on November 1. Partial line-up slowly unveiled

The shoot is under way for Porto 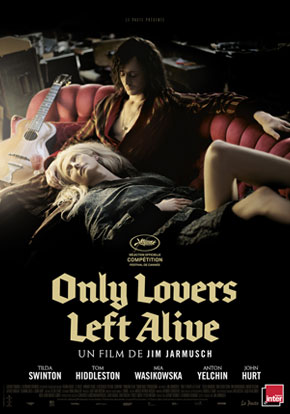 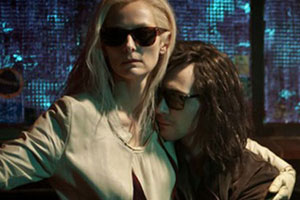