Tableau Noir: another school is possible 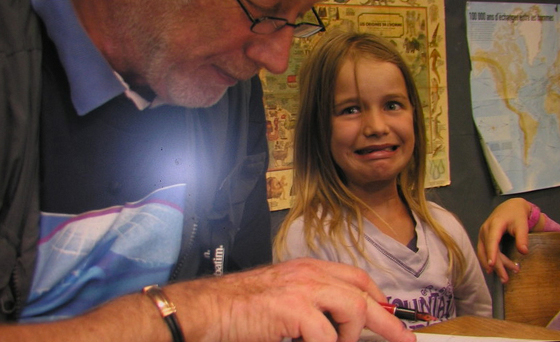 If Locarno’s Piazza Grande is the heart of Locarno Film Festival, the Fevi Palazzetto, which normally hosts the screening of films in competition is its heartbeat. Today, the 66th Locarno Film Festival was full of commotion and profound admiration for an extraordinary film by Yves Yersin, Tableau Noir [+see also:
trailer
film profile].

The feature film plunges spectators into an intimate and inaccessible microcosm of an elementary school perched at 1153 metres in the Jura region with students between the ages of 6 and 12 having to learn in a single, multilevel classroom.

It is a touching journey, made with extreme grace and sensitivity in the relational universe of schools and the communities in which they live. In fact, in this remote part of the Swiss Alps, the Derrière-Pertuis elementary school also represents social glue for its inhabitants who are spread out in isolated farms across the valley and the vertiginous mountain slopes.

As Yves Yersin illustrated during his press conference, the film was characterised by two narrative elements: the ways in which knowledge is passed on, and the imminent closure of the school, which the director happened upon unwittingly. In order to properly and spontaneously convey the teaching environment, the director used two cameras simultaneously capturing the magical, intimate atmosphere of exchange between students and teacher.

It is precisely this magic that the director wants to show us, not so much in order to expose a model that is disappearing, but more to highlight a kind of learning environment close to the fabric of society, characterised by creativity, respect for diversity, centred around cooperation between students and group work. In clear terms: a way of learning that creates individuals capable of living in complex and articulated societies like our own.

more about: Black Board

The Greek capital welcomes 580 operators, distributors, sellers, producers and institution members for the annual conference of the cinema network

Locarno 2013: Story of my Death wins the Golden Leopard

The 66th edition of the Locarno Film Festival ended on Saturday with the victory of a Spanish-French coproduction. The Portuguese film What Now? Remind Me is awarded the Special Prize of the Jury

Tableau Noir: another school is possible