The Enemy Within offers smart twist on xenophobia

02/10/2013 - Over a decade after his box-office hit Backdoor, Yorgos Tsemberopoulos returns to screens ready to enchant again with ageless sensibility.

Boasting the most polished production values visible in the Athens International Film Festival’s Greek section, where Montreal-debuted The Enemy Within [+see also:
trailer
film profile] had its national premiere Saturday, Tsemberopoulos’ return brings along a sense of classy filmmaking that’s starting to be missed from local projects.

Touching on a delicate and very current issue, his film follows a middle-aged man, who sees his life collapse, when masked hoodlums break into his house, gag him and his family and rape his daughter before taking off with money, valuables and the family’s car. Though his family urges him to put it all behind them, the man can’t shake off the idea that he couldn’t protect his love-ones.

Ripe theme for a revenge story, Tsemberopoulos’ film is more concerned with the machinations that force a well-educated middle-class pacifist to arm his hand, as well as the repercussions of his actions, rather than the actual procedures of doing so. Setting up a tight net of misguidance, Giorgos Tsiros’ script focuses on the corrosive forces that shake his protagonist (powerfully portrayed by Manolis Mavromatakis) off balance and pushes his social and moral compass out of view.

A director known to take his time between projects (all his films share decade-long intervals), Tsemberopoulos approaches his drama with measured composure. He delicately balances his hero’s need for justice, with his sense of social inequalities as the true cause of blind violence. Carefully treading the dangerous tides of racism, xenophobia and vigilantism, he shines a light on the everyman’s potential for extreme evil, as well as the depth of humanism hidden even in the darkest of hearts.

more about: The Enemy Within

Short-film veteran Gabriel Tzafka’s feature debut will be among the 21 features and nine shorts selected to share a total budget of €669,000

Through its various sections, competitions and panoramas, and its Italian and Syrian Focuses, the gathering will be marking its first quarter of a century by painting a portrait of Mediterranean youth

In line with the festival’s celebration of 100 years of Greek cinema, the Agora’s Crossroads section shines a bright spotlight on local production

The blockbuster period film was crowned Movie of the Year with six awards, while social drama The Enemy Within came second with three gongs

Swedish director Jan Troell’s film has triumphed at the festival in Paris; the jury chaired by Krzysztof Zanussi also singled out The Gambler and The Enemy Within

Pantelis Voulgaris’ period drama leads the HFA nominations with 13 gongs, The Enemy Within follows with 10 nominations, and Miss Violence gathers 8

The 9th edition of this event debuted in the presence of Jim Sheridan. On the menu, nine unreleased films in competition and numerous tributes 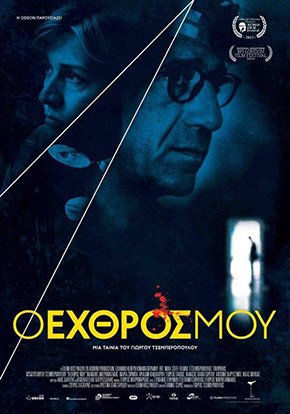