Vandal: training tale in the world of graffiti

29/11/2013 - First feature length film by Hélier Cisterne, in competition at the 31st Turin Film Festival, stars a rebellious teenager who becomes a tagger

Vandal is what is written on walls. It is the writing of an anonymous tagger who turns up in the most unsuspected places and whose unthinkable actions are documented on YouTube. A shadow that moves in the night, mythical and fleeting. It is along these lines that Vandal [+see also:
trailer
film profile] plays out: a debut feature film for French Hélier Cisterne, in competition at the 31st Turin Film Festival. But the film’s main draw is not him, but Chétif, a worried and rebellious sixteen-year-old, who - following the steps of the mysterious tagger - will also try and find himself.

When he gets to Strasburg, Chétif (Zinedine Benchenine) has never even touched spray paint. Sent away by his relatives to straighten himself up, the boy, whose mother is French and father is Northern African, divides himself between school and his work on a construction site. It doesn’t take him long to create bad relations between his new family and schoolmates. He feels like he is suffocating and wants to leave. But then he meets Elodie (Chloé Lecerf), a problem-ridden girl, just like him, a little tomboyish, with a soft smile. They fall in love.

Thomas (Emile Berling), his cousin, is the one who is instrumental in getting him to stay though. A model student and good boy during the day, at night Thomas puts on a hoody and goes and paints the city’s walls. One night, he brings Chétif along, who will discover a way to express his rage.

Vandal oscillates between a coming of age film and a social drama, managing to do what good films do: transport the spectator in a little known world. This is a world of spray paint, nocturnal hideouts, tagging challenges, illicit escapades: black outlines and hoodies are the shadows projected onto walls, with the young men ready to run at the sound of the first car and re-emerge later to finish their work. In the morning, they admire all of the graffiti from the rooftops of the city.

There is slight disappointment in that the legendary Vandal remains mysterious. Pursued by his followers who want to discover his identity, he has an accident and exits the scene. But this invisible character, notable for his absence, will leave a mark on Chétif. The group separates, the hideout is closed, but the boy will have finally found his place in the world. A space that belongs entirely to him where he can feel big and look at life from a vantage point.

Camellia Jordana and Guang Ho star in the director's first feature. A Koro Films production to be sold by WTFilms

Vincent Lacoste and Vicky Krieps star in the filmmaker's second feature film. A Les Films du Bélier production, to be sold by Charades

Shooting to start in September for Terminal Sud

The new film by Rabah Ameur-Zaïmeche will be toplined by Ramzy Bedia; the Sarrazink production will be distributed in France by Potemkine Films

The cast includes Leïla Bekhti, Edouard Baer, Ramzy Bedia, Eye Haïdara and Laurent Capelluto; the film is being staged by Karé Productions and will be sold by Orange Studio

The company, which is run by Justin Taurand, has won the 2016 edition of the award, rewarding a young independent production company 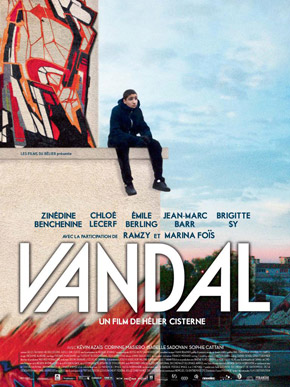