October November [+see also:
trailer
film profile] is a decidedly quiet, low-key family drama, which focuses on two sisters and the people around them. The younger sister, Sonja (Nora von Waldstätten, dubbed Most Promising Actress at the Max Ophuls Awards in 2010), is a popular actress living in Berlin, but her life is not all roses - she is emotionally detached from others and dealing with a depression on her own. She gets a lot of advances from men (including a married one because of whom she gets slapped in a restaurant by his wife), but this is clearly not something that makes her happy.

On the other hand, we have the older sister Verena (Ursula Strauss, from Revanche [+see also:
film review
trailer
interview: Götz Spielmann
film profile]) who still lives in their hometown in the Austrian mountains, where she, together with loving, hard-working husband (Johannes Zeiler, Revanche, Faust), tends to the inn owned by her ailing father (Peter Simonischek). She seems to be leading a full, happy life, a bright young son included, but something lacks there for her too, as she is having an affair with local doctor Andreas (Sebastian Koch).

Sonja and Verena reach the overdue reunion when the former comes to visit, primarily because of their father's sickness, and it is time for revelations and the family skeletons to come out of the closet.

October November is a finely nuanced drama that leaves plenty of room for audiences to ponder on the possibilities of the characters' relationships both between the lines of dialogue and the counterpoint between country and city, strongly present and one of the rare things the film has in common with Revanche, executed with precision and elegance by Spielmann and editor Karina Ressler. Another contrast is brought by Martin Gschlacht's cinematography which works equally well in warm colours of the inn interiors and village exteriors, and cold Berlin apartments and restaurants.

October November was produced by Coop99 Filmproduktion and SpielmannFilm, while The Match Factory handles international rights.

The Greek capital welcomes 580 operators, distributors, sellers, producers and institution members for the annual conference of the cinema network

The 51st Viennale bets on prestige 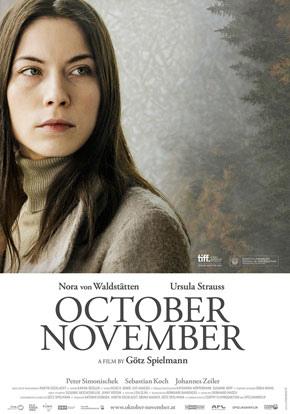