Yves Saint Laurent: the life story of a fashion icon

A young man seen from behind, sat at a table, is drawing in front of an open window. The year is 1957. At only 21 years old, Yves Saint Laurent has just been hired by Christian Dior, marking his brilliant entrance into a career that will consecrate him as an iconic figure of world fashion, but his hyper-sensitivity (“it makes me terribly anxious”) already foreshadow the depressive abyss which will surround him all his life. By tackling with Yves Saint Laurent [+see also:
trailer
interview: Jalil Lespert
film profile] the biopic of the famous designer through the free adaptation of the book by Laurence Benaïm, director Jalil Lespert (who co-signed the screenplay with Marie-Pierre Huster and Jacques Fieschi) took the risk of falling into hagiography, especially since the film received the official backing of Pierre Bergé, the unquestionable life and work partner of Yves Saint Laurent. By choosing as a common thread to a story covering two decades the love relationship that brought together the two men, the filmmaker avoids this trap with relative skill, entangling the professional adventures of the duo (the quest for independence and the creation of their own brand, major collections and the backstage of the fashion world with its procession of aficionados, etc) and the episodes of their life as a couple. But the film does not manage to free itself completely of the challenge of a certain laudatory praise, unwinding an enjoyable novel-like story with no rough edges where the creativity and glaring weaknesses of the designer (soon diagnosed as bi-polar before falling into drugs) are handled in the margin of the story, without any real psychological depth, despite the great quality of the performance of the lead role.

Indeed, beyond the perfect rendition of the 60’s and 70’s and the Yves Saint Laurent collections, the feature is mostly an opportunity for the two main actors to unveil new sides to their blooming talent. At only 24 years old, Pierre Niney (nominated for the Best Newcomer César in 2012 and 2013 for J'aime regarder les filles [+see also:
trailer
interview: Lou de Laâge
film profile] and Comme des frères [+see also:
trailer
film profile], and the strength this year behind the box office success of 20 ans d'écart) puts on what seems like a second skin portraying the offbeat personality of Yves Saint Laurent, performing a real feat in mimicry, even if his youth probably keeps him from further developing the inner distress of the artist in his later years. As for Guillaume Gallienne, after his performance as an actor-director in Me Myself and Mum [+see also:
film review
trailer
film profile], he exceeds expectations in the more monolithic role of Pierre Bergé. Surrounding the two prodigies of the Comédie Française, the rest of the cast (except Charlotte Le Bon) struggles to exist, the screenplay giving, to be fair, little room to the supporting actors, which enhances the overall impression of a succession of relatively successful scenes, a cinematographic production paradoxically more in line with the prêt-à-porter industry (a calibrated production) than with haute couture (a cinematographic masterpiece), without however losing the indivisible flavour of a highly novel-like destiny.

Launched by SND in French theatres on January 8, Yves Saint Laurent was selected to open the Panorama of the 64th Berlinale (February 6 to 16, 2014).

Yves Saint Laurent: beyond the legend

Following its box-office success in France, Jalil Lespert’s Yves Saint Laurent is being presented at the Berlinale

Yves Saint Laurent: the life story of a fashion icon

Review: Through the Fire 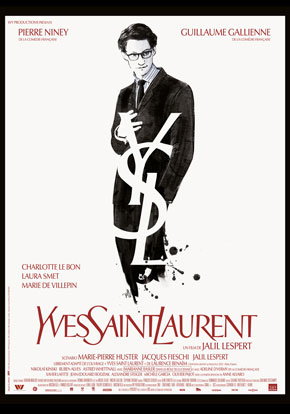