28/01/2014 - The Catalan producer jumps into fiction with a singular and audacious portrait of Amedeo of Savoy, in the running for a Tiger Award

Can history be fetishist? Can it be a singular departure point to reflect, be astonished and also entertained? For Lluís Miñarro, one of Spain’s major independent producers (he was behind pieces of work by Lisandro Alonso, Manoel de Oliveira and Apichatpong Weerasethakul), the answer seems to be yes. In Falling Star [+see also:
trailer
interview: Luis Miñarro ­
film profile] (Estrella fugaz), in the running for a Tiger Award at the International Film Festival in Rotterdam, the fetish in question is the ruling of Amedeo of Savoy over Spain, which was defined by institutional instability, showed the lack of usefulness of a government distant from its people and seems to resonate surprisingly well with the world today, 143 years on.

The Catalan producer started his career in fiction with this film produced by his company Eddie Saeta, one that is willingly disruptive, much like the atmosphere in which the film takes place. Around 1870, Amedeo of Savoy (Àlex Brendemühl), the foreign king, tried to put an ungovernable country in order. A king with ideas, who went largely ignored and was attacked by a corrupt and dismembered government. A king who sought to install a parliamentary monarchy, the beginnings of a social state and reading and writing for all, who ended up abandoning his ideas after he was met with only obstacles, walls and slammed doors - sometimes literally. The streets are consumed by revolt, and Amedeo and his court, unable to leave the palace, abandon themselves to absolute hedonism.

Miñarro draws up a series of tableaux vivant – thanks to the magnificent and picturesque photography by Jimmy Gimferrer – which confines life to the palace together with characters like Caravaggio, Baudelaire or Françoise Hardy. It is in this disparity that Falling Star comes to life: in between drama, surrealism, comedy and musical. The life of the king, his wife Maria Vittoria (Bárbara Lennie) and his court (in particular Lola Dueñas) is a life of sleepwalking, which drifts from sex to dreams, grounded and celestial, symbolic and concrete. The other great contrast offered by Falling Star is that between the seriousness of his ideas, there is a will, expressed in the credits, to be a divertissement. Thus the film reflects the current Spanish crisis through a corrupt government, the distance from its people and the doubts laid at the door of the nation (the Catalan conflict emerges through a discourse by Amedeo and languages used), but without losing the ability to fantasise, surprise and, now that we are here, entertain.

“I find continuing to make this kind of film hard”

Interview: Lluís Miñarro • Director of Love Me Not

The Rome Independent Film Festival will be back from 25 November-1 December, boasting 110 titles straddling fiction and documentary, plus focuses on Spain, Croatia and Bosnia

Today, 43 French distributors will discover the titles on the programme of "Dífferent 8! L'autre cinéma espagnol"

Daniela Fejerman wraps the shoot for La espera in Lithuania

The filming of this intense, personal drama has come to an end; the movie examines the difficulties and ins and outs of a process whereby a Spanish couple try to adopt a child in Eastern Europe 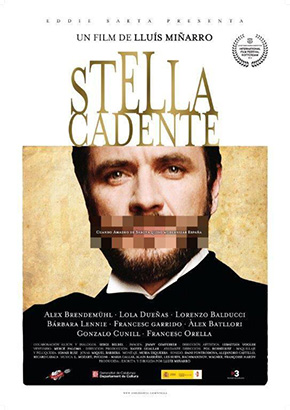