Hope: a drop of love in a cruel world

20/05/2014 - CANNES 2014: Reality cinema for Boris Lojkine and a moving story of a desperate trip across Northern Africa by a Nigerian and a Cameroonian who dream of Europe

Illegal immigration is a theme regularly featured on the big screen - including journeys that end at the Mexican American border, Pakistani European journeys from In This World by Michael Winterbottom, the story of the crossing in La Pirogue [+see also:
trailer
film profile] by Moussa Touré. This means it is relatively hard to explore the subject in a convincing and original manner. Yet this is what French director Boris Lojkine has managed to do with Hope [+see also:
trailer
interview: Boris Lojkine
film profile], his second feature-length film (his first fiction one), revealed in competition during Critics’ Week at the 67th Cannes Film Festival.

Based on his experience as a documentary filmmaker, the director tells the story of Nigerian Hope (Endurance Newton) and Cameroonian Léonard (Justin Wang) with great precision. From the depths of the Sahara, where the latter takes pity on the former after she has been raped by policemen (as his travel companions continue their journey), to the squats of a racist Tamanrasset, where jungle laws of the mafia-controlled, nationality-divided ghetto rule, circumstances quickly bring our two heroes together, with few words and much tension. In this place, where no one gives anyone anything for free, Léonard will quickly come to regret bringing Hope with him into the Cameroonian section.

Forced to get married by the leader of the camp (the Chairman, saluted by his men to the cry of “Power”) in order to be allowed entry, Léonard forces Hope to repay her debt to him by selling her body. They develop a small business within the city until the Chairman finds out and they are forced to flee before their business (€20 a go) is co-opted by him. After managing to pass the Moroccan border, escaping police, Hope and Léonard (who begin falling in love) will encounter more obstacles in the Nigerian ghetto in the seaside town of Gourougou, just one step away from Spain and their European dream.

The film is as authentic as it is without compromise, from the falsification of passports to fake bank notes, immigrant community violence and crime, voodoo rituals, Christian premonitions and Muslim prayers. First and foremost, Hope offers a purely cinematic narrative line full of quality, founded in sobriety. It explores the silences, looks and profiles of its two main characters (charismatic amateur actors), a true challenge in such a brutal world. The incredible and moving realism that emerges reveals a director whose work should be kept an eye on. After Louise Wimmer [+see also:
film review
trailer
film profile], a talented discovery by producer Bruno Nahon (Zadig Films).

CANNES 2014: Cineuropa met up with French director Boris Lojkine to talk about his Hope, recipient of the SACD Award at the Critic's Week

French filmmaker Boris Lojkine tells us about his second feature, Camille, revealed in Locarno and distributed in France by Pyramide

Fatsah Bouyahmed, Jamel Debbouzze and Lambert Wilson are among the cast of the filmmaker’s second feature, produced by Quad Productions 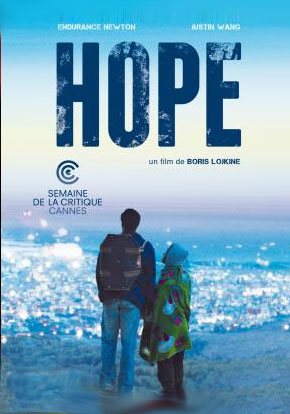