09/09/2014 - The festival has also announced a symposium called “Fiction and reality. Beyond Big Brother”, in which activist Julian Assange is expected to participate 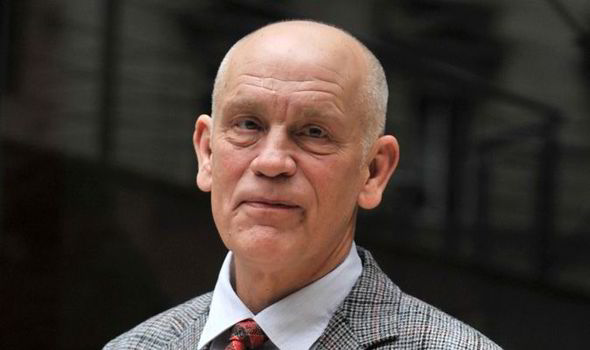 This week, the Lisbon & Estoril Film Festival (LEFFEST) publically revealed some of the programming content of its eighth edition, which is due to take place from 7-16 November. While the official unveiling of the films in competition and the jury is scheduled for October, the event’s director, Paulo Branco, has already announced some of the parallel events and their guests, which include actors John Malkovich, Maria de Medeiros and… activist Julian Assange.

It is still unknown exactly how Assange will grace the festival with his presence; a likely possibility is some kind of virtual participation, seeing as the controversial journalist has been in exile since 2012, holed up in the Ecuadorian Embassy in London. However, Branco announced his attendance as part of a three-day international symposium entitled “Fiction and reality. Beyond Big Brother”, in which philosopher Noam Chomsky and president of the PRISA group Juan Luis Cebrián will also take part. Other guests still to be confirmed include the ex-President of Brazil, Lula da Silva. The symposium reinforces the festival’s very raison d’être – that is, not to be an event that is exclusively dedicated to the seventh art – and highlights its tendency to build bridges with other artistic and socio-political realities.

The only film confirmed so far is Casanova Variations [+see also:
film review
trailer
film profile], by Austrian director Michael Sturminger, an operatic production by Branco that is set to have its world premiere at the 62nd San Sebastian Film Festival (read more). Its star, John Malkovich, will be a guest of honour at the festival.

Also featuring on the programme is a tribute to Maria de Medeiros, the most successful international export out of all of Portugal’s actresses, who is also a filmmaker and singer. The schedule includes screenings of some of her directorial efforts, such as The Death of the Prince (1991) and April Captains (2000), as well as other titles selected by Medeiros herself. The aim is to hold premieres for feature films that have not yet been seen in Portugal. Medeiros was seen on the silver screen most recently at the Venice Film Festival, which has just drawn to a close, where she was part of the cast of Abel Ferrara’s Pasolini [+see also:
film review
trailer
interview: Abel Ferrara
film profile].

Also standing out on the programme is a painting exhibition by US director David Lynch and French painter Jean-Michel Alberola. The last day of the festival will boast a concert by American musician Arto Lindsay, who last year was a jury member at the event.