Toto and His Sisters: a touching and engrossing observational documentary

Romanian director Alexander Nanau has returned five years after his multi-award-winning The World According to Ion B. with a new documentary film. While his previous effort consisted of interviews and archive footage, Toto and His Sisters [+see also:
trailer
film profile] is an observational documentary following three Roma children as they go through existential problems such as poverty, drugs and prison, but it also focuses on some beautifully touching moments in their lives.

The titular protagonists are ten-year-old Totonel and his teenage sisters, Andreea and Ana. The Roma children live in a run-down, one-room apartment, owned by their mother Siminca, who is in prison for selling heroin. They are supposed to be taken care of by their mother’s brothers – but all they do is come to the place to shoot heroin. Ana is also an addict, and gets arrested for the same crime as her mother.

After this happens, Andreea and Toto are taken in by an orphanage. They both start learning to read and write – Andreea in her 15th year of life – and Toto discovers a talent and a passion: dancing with a local hip-hop dance group.

Ana returns from jail at one point – she cannot be sentenced because of a lack of evidence – and promises never to touch drugs again. But this noble attempt very soon ends up the way it usually does with heroin addicts.

Nanau followed the children for a couple of years and created a thoroughly engrossing film. Using only observational methods, the director paints a painful picture of a troubled childhood full of hardship and experiences that no kid should ever encounter.

The images of poverty and drug use are hard-hitting, but are interspersed with moments of joy and love. This balance makes for a deeply touching experience, as beautiful moments such as Toto’s discovery of his talent for dancing, and the sincere affection between Toto and Andreea, who are very close and are taking care of each other, are rare compared to the predominant feeling of depravity and suffering – but that is what makes them all the more effective. Toto and His Sisters is a work of sincerity and empathy, but Nanau is restrained enough in showing sympathy to avoid the pitfalls of sentimentality.

more about: Toto and His Sisters

Intriguing, socially conscious and personal documentary projects at the post-production stage have been showcased at Karlovy Vary

The fifth generation of Emerging Producers presented in Jihlava

Paolo Sorrentino's film vies for five awards, while Yorgos Lanthimos' The Lobster and Roy Andersson's A Pigeon Sat on a Branch Reflecting on Existence follow hot on its heels with four nominations 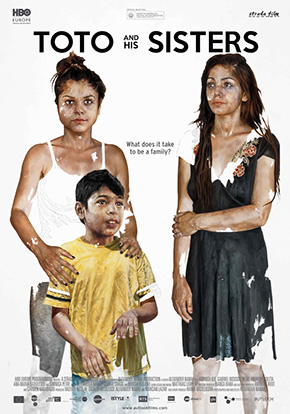