Maurizius Staerkle-Drux's latest documentary weaves multiple stories together: personal trajectories that meet and clash weaving a subtle web that seems to imprison all involved. If, at first glance, the film appears to want to be the biography of a mythical family, the Böhms architects, in reality the Swiss director's main intention is to analyse the subtle mechanisms that rule the structure of all patriarchal families. The affinity, the harmony that is established between its members and, at the same time, the need to examine oneself far from family “models”. As the original title suggests: Die Böhms-Architektur einer Familie, Maurizius Staerkle-Drux's film analyses the architecture of a (and not just of the) family, starting from its more or less solid foundations, to the most personal details of its interior design. Using the exemplary model of the Böhms family Concrete Love-The Böhm Family [+see also:
trailer
film profile] speaks to us about universal feelings: of love, of passion (obsession) but also of frustration and anger, powerful and extreme feelings that have given life to some of the most important architecture of the 20th century.

At the centre of this mythical dynasty of architects, we have Gottfried Böhms, who, at ninety four years of age continues every day to tend to his sketches, models and designs. He creates these with a hand (often filmed in close up, so that it has become a symbol of his persona) so steady that it almost seems unreal. Despite his age, Gottfried Böhms emanates a super human strength that flows from his passion for architecture, handed down to him by his father, Dominikus. Herr Böhms felt an innate need that became the very driving force of his life, spurred on also and above all by his three architect sons: Stephen, Peter and Paul. At the heart of this micro think tank is Elisabeth, wife, architect and the whole family's main source of inspiration. Even if Gottfried, just like his impressive cement, steel and glass constructions, appears to reign over everyone, the death of Elisabeth reveals the major importance of her presence, so strong that she can make the very foundations of the patriarchal system established by him tremble. Without Elisabeth, the Böhms' immense and wonderful family structure loses its emotional centre, as if the light was suddenly removed from their creations, imprisoning them inside them.

Through his subtle and deft analysis of the Böhms' different architectural universes, Maurizius Staerkle-Drux speaks to us about the personality of its members, about the conflicts therein, about the need to prove oneself despite the mutual respect they all receive. And that's how, like the light that pierces through the windows of the Santa Maria Regina della Pace church in Neviges or the laughter and sketches warm up the grim cement pool at the family villa, emotions, frictions, slowly begin to emerge from the seeming family calm. This is a film about architecture but especially about life and about the burden of inheritance. It is liberating and elegant.

Concrete Love-The Böhm Family is sold worldwide by Lichtblick Film. The film will hit German screens on 27 January, while it will be out in Switzerland from 12 February.

No fewer than 18 Swiss productions at DOK.fest

The 30° edition of DOK.fest, an international documentary film festival held in Munich, welcomes a rich selection of Swiss productions and co-productions

The Solothurn Film Festival kicks off its 50th edition 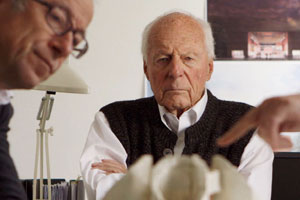