El gran salto adelante: Spain, a country teetering on the edge of the abyss

05/03/2015 - With this fiction film peppered with harsh reality, Pablo Llorca rounds off the critique of the modern-day social situation in Spain that he began with his recent documentary País de todo a cien

El gran salto adelante [+see also:
trailer
film profile] (lit. “The Big Leap Forward”) – a fiction film – opens with images captured in the streets of Madrid: a throng of people, holding placards, are demonstrating against the politicians who have turned Spain into a ghostly landscape, consumed by corruption. He depicted – in the guise of a documentary road movie – that exact same soil, ravaged from north to south, in his previous film, the terrifying (owing to the dreadful bleakness it portrays) País de todo a cien [+see also:
trailer
film profile] (lit. “Pound Shop Country”), which is also being released imminently. In the latter film, a foreigner traverses part of the peninsula, astonished at the sheer excesses perpetrated by the country’s leaders – be they national ones, heads of the autonomous regions or those in charge of the municipalities – who have left behind a landscape strewn with absurd architectural carcasses, which now feels ghostly in the eyes of anyone unfamiliar with the day-to-day life of this country cast adrift. The voice-over by Pedro Casablanc wisely and gloomily adds substance to what Pablo Llorca’s images fearlessly condemn, captured as they are with both vigour and immediacy.

So we cannot talk about one film without referring to the other, because they complement each other perfectly (in fact, both were presented at the most recent edition of the Seville European Film Festival). With his documentary, Llorca has unfurled the map of the nation where the characters in El gran salto adelante are doing their best to survive. And while corruption, theft and dissatisfaction have left their imprint on the entire landscape of this country, something similar has been passed on to its inhabitants: the teachers at a school in a neighbourhood on the outskirts of the capital are on strike in order to stand up for state education. The demonstrators include Andrés (played by Israel Elejalde, nominated at the most recent Goyas in the category of Best New Actor for his work in Magical Girl [+see also:
film review
trailer
interview: Carlos Vermut
film profile]), who begins to take quite an interest in the beautiful and sexy young Mexican woman Elena (Fabiola Vargas), the mother of one of his pupils, married to an older man (Antonio Dechent) whom he helps to go back home one night. Andrés also starts to frequent a park where members of the Latin American community meet up during their free time.

Such a threadbare plot – but one that reflects day-to-day life so well – allows the director of Recoletos Up & Down to immerse us in this reality without any filters or frills. In El gran salto adelante, we will bear witness to the daily lives of the ordinary people from a neighbourhood as poor as La Fortuna (which means “luck” in Spanish – quite an ironic name for an area that is pretty down on its luck), and we will observe the ways in which they live and survive. The methods they use are no longer ethical or honest, but they allow them to take up the fight, whatever the cost.

In such a strained and tense environment as this, where it is becoming clear that the moment of hitting rock bottom is nigh, it ends up being extremely complicated for love to take hold, and that’s why the romance that Andrés strikes up is weighed down by apathy, lies and selfishness. And his character is not the only one teetering on the edge of the abyss: schoolmates, the unemployed, retired people, those evicted from their homes, students... we see them all parade through this highly restrained film that, as tends to be the general rule in his unrestricted filmography, Pablo Llorca himself produced, wrote and directed.

El gran salto adelante: Spain, a country teetering on the edge of the abyss

With this fiction film peppered with harsh reality, Pablo Llorca rounds off the critique of the modern-day social situation in Spain that he began with his recent documentary País de todo a cien 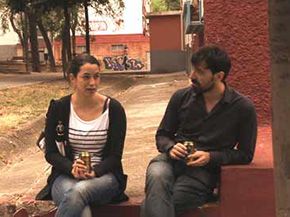