07/07/2015 - KARLOVY VARY 2015: Tolga Karaçelik's second feature, Ivy, displays narrative and visual mastery as it tells the story of workers on a cargo ship who become ridden with despair

Tolga Karaçelik's second feature, Ivy [+see also:
trailer
interview: Tolga Karaçelik
film profile], displays narrative and visual mastery in exploring the decay of conventions of all kinds, as 6 workers stuck on a cargo ship become ridden with despair and cabin fever. In its structure and tone, this original psychological thriller bares a clearly expressed literary influence, the strongest being Coleridge, whose poem The Rhyme of the Ancient Mariner is used as a way of demarcating its three parts.

Men of unequal ranks on the vessel, as well as in their faith and moral principles, the central characters all have different reasons for volunteering to stay on board- introduced through a series of fast cuts. Beybaba, the captain, does it out of a sense of duty. Ismail, who becomes the captain's right hand, and Nadir, now left as the main cook, need money to eventually improve the condition of their families, so they hang on the promise that they will be first in line to be paid all they are owed once the situation of the bankrupt shipowner is clarified. What got stoners Cenk and Alper on the ship in the first place was the need to stay away from trouble they've gotten themselves into. As for Kurd, his motivation remains a mystery, as do his personality and intentions. His massive frame, constant silence, and peculiar physiognomy will only provide more reason for the other 5 to doubt their sanity and fear for their lives along the way.

Contemporary Turkish cinema has come to be associated with the slow-paced picturesque style of Nuri Bilge Ceylan. But while director of photography Gökhan Tiryaki (Once Upon a Time in Anatolia [+see also:
trailer
film profile], Winter Sleep [+see also:
film review
trailer
interview: Nuri Bilge Ceylan
film profile]) is also exerting his craft in Ivy, the result is very different. After the swift introduction of the characters, bursting with light and color, the visuals settle in a mellow palette of the ocean's blue and the dusty tones of the ship and the worker's orange overalls.

As the food supplies are decreasing, the pace of the film dwindles, time dragging by as slow as the snails that keep showing up on deck. The camera lingers with the characters as they go about their dull days and helps translate the crumbling of authority, in a scene such as that in which an angry Beybaba ventures out of his cabin and calls all men to deck trying to re-instate his command. As he is about to go back in, a hammer is thrown in his direction, but the director pertinently withholds from the viewers who actually threw it; the most likely suspect is short-tempered Cenk, but at this point it could have truly been anyone.

With no end to their situation in sight, the men start turning against each other, the mistrust and anger growing and spreading like the poison ivy the title references. The disappearance of one of them deepens the crisis and his apparent return as a ghost in the third act throws the characters further off the already precarious balance. A series of fights, all threatening to resume to fists, build up to the final spiraling out of control, when an infusion of magical realism brings a new and appropriately timed spin to the story.

What it ultimately resolves to is not an external solution for the 6 characters. As they have had to manage by themselves up until now, they will also be the ones seeking closure according to the new 'rules' they have co-developed in their chaos and despair. The ending will disappoint those who were hoping for either a happy resolution, or a Shakespeare-like body count. Karaçelik is faithful to his characters and thus more preoccupied by their solace, than by that of viewers that were hoping for a clear-cut denouement.

“Who remains at the top of the hierarchy when we don’t need it anymore?”

Cineuropa sat down with Turkish director Tolga Karaçelik to discuss his film Ivy, winner of the Cineuropa Prize at the Lecce European Film Festival

Turkish filmmaker Tolga Karaçelik's third feature is an engaging and amusing, if sometimes unbalanced, combination of drama and comedy

Best Screenplay goes to Ines Tanović for Our Everyday Life, and the Cineuropa prize is awarded to Turkish film Ivy by Tolga Karaçelik

KARLOVY VARY 2015: Tolga Karaçelik's second feature, Ivy, displays narrative and visual mastery as it tells the story of workers on a cargo ship who become ridden with despair 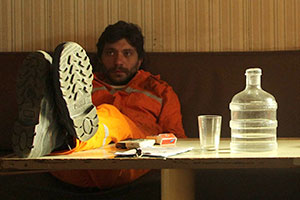