Like a Cast Shadow, a psychotic journey into a world between comforting domestic walls

Michael Krummenacher, one of the young Swiss directors behind the provocative and edgy Wonderland [+see also:
film review
trailer
interview: Carmen Jaquier and Lionel R…
film profile], sends shivers down the spines of audiences at the Solothurn Film Festival with a poisonous and seductively violent debut feature. Like a Cast Shadow (Sibylle) [+see also:
trailer
film profile] is a film that is both enthralling and dangerous, a sort of siren song you surrender to despite being aware of the imminent danger.

Krumenacher keeps the viewer awake, very awake, in a constant state of alertness, looking for a truth that never stops changing. And it is precisely this instability of reality that interests our Swiss director, a reality that is not unique and tangible, but on the contrary, does nothing but change and regenerate, revealing a truth that is often painful to face up to. How can we be sure that what we are experiencing is not simply an interpretation of reality itself? Are our minds not the barometers that send us skidding dangerously towards what we commonly call “madness”?

At first glance, the life of Sibylle Froebisch (Anne Ratte-Polle) seems perfect and immaculate. Her husband, with whom she runs an architecture studio, and her two children, have calm and well-balanced lives. In spite of this, Sibylle feels uneasy and can’t communicate her feelings. Not even the calm and pleasantness of a family holiday to Italy manages to put her at ease or allow her to sleep at night. During a morning walk close to (perhaps too close to) the edges of the cliffs overlooking Lake Garda, our (anti)hero sees a woman of the same age commit suicide. Nothing will ever be the same again, and when she comes back off holiday a feeling of estrangement gradually takes over the calm of her home environment. The similarities between her life and that of the woman she met on the cliffs in Italy start to multiply at an unsettling rate.

The director succeeds in stylishly combining a genre film with a keen eye for stylistic features, creating a mysterious world in which beauty rhymes with decadence and terror. The camera follows, or rather stalks, Sibylle like an unsettling shadow she can’t shake off. The film nods to genre masters like Dario Argento, above all in the ornate and careful movements of the camera and the use of houses that become terribly lifelike (it’s no coincidence that Sibylle and her husband are architects), and Kubrick (The Shining), with the obsessive use of the colour red and the rivers of blood that suddenly gush out of the walls and doors. Sibylle’s inner universe suddenly seizes control of the world around her, revealing an icy cold reality there’s no running away from. It’s now her mind, or rather, her “derailed” mind that takes control of her life, a sort of drunk driver at the wheel of a defective car.

Michael Krumenacher takes us by the hand and leads us into a sensual and dangerous world where nothing is at it seems, not even that which we thought was unchangeable. An elegant and captivating film with a pop feel to it. Definitely reinvigorating.

Like a Cast Shadow is being sold internationally by Passanten Filmproduktion.

The NIFFF launches a new section dedicated to Swiss film

Like a Cast Shadow, a psychotic journey into a world between comforting domestic walls 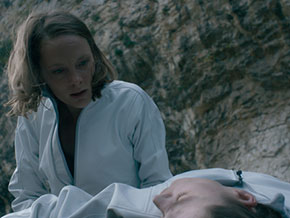 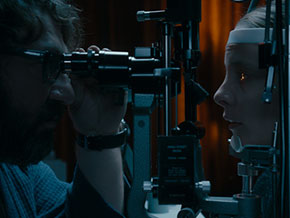 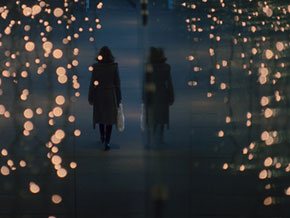