WINWIN: The masquerade of monster capitalism

01/02/2016 - In Daniel Hoesl's bitingly satirical sophomore feature, which is being screened at Rotterdam this year, “the only religion left is faith in money and even debt”

WINWIN picks up at more or less the same starting point as Soldier Jane, as the opening shot of fluffy clouds set against the aquamarine sky regales us with a tongue-in-cheek scene: a private jet full of hedge-fund managers and investors descends, as if from Mount Olympus (or in this case, Wall Street), and these demigods of global capital start walking the Earth in their posh clothes, radiating a redeemer vibe. The group's pompous arrival gives us a taste of the hyperbole that will steer WINWIN into satirical waters, and Hoesl is not afraid to take a stab at farce whenever possible.

The director further develops the filmmaking style that he started crafting in his debut, using mostly fixed shots in meticulously composed, minimalistic tableaux. A great deal of attention was invested in the art design, accentuating the sterile nature of everything, most drastically epitomised by the vast, bare, glass-and-steel open space of the investors' bureau, which serves as a stark reminder of the next stage of money – the immateriality of cybercapitalism. Using biting satire, the director dramatically contrasts two colliding realities: an aseptic one and one that is more authentic, portraying an asymmetrical environment through an unexpected pan shot, thus deepening the formal disharmony. Subsequent scenes show the masquerade of making and breaking capital, one world perversely devouring others, and a true philosopher's stone of the free-market economy turning a bunch of vagrants into a band of high-profile CEOs, in a travesty of power. This asymmetry doubles as a superb metaphor for the flow of global capital into too few private hands.

The four leading capitalist messiahs behind the negotiation table take centre stage, their faces radiating serenity as hard bargains are struck and the integrity of politicians or trade unions are corroded. The international cast of experienced actors, who have all had a certain experience of their own with the main topic, according to the European Film Conspiracy rulebook, masters the necessary aura of fallen angels, raking in countless sums of ethereal – and untraceable – riches, and breeding greed. Japanese-born, Vienna-educated Nahoko Fort-Nishigami, US film and television actor Jeff Ricketts and Canadian actress Stephanie Cumming (the lead from Shirley – Visions of Reality [+see also:
trailer
film profile], Gustav Deutsch's visually stunning recreation of Edward Hopper's paintings) make up the monetary rat pack, led by captain of charisma Christoph Dostal as Nicolas Lachman, the mastermind of asset-harvesting, before whom failed entrepreneurs and desperate statesmen come to bow. Their faces, frequently the focus of close-up shots, perfectly convey the arrogance lurking beneath their masks as liberators.

Hoesl caustically channels his frustration over the financial imbalance from the consumerist-agricultural polarity of Soldier Jane to the hornet's nest of the upper echelons of investors. His belief that “the only religion left is faith in money and even debt” in this church of the free-market economy, which holds such menace within it, has a much bolder outline in the capitalistic cabaret of WINWIN.

The movie was produced by European Film Conspiracy and was funded by the BKA (Federal Chancellery of Austria), the ORF (Austrian Broadcasting Corporation), Land Niederösterreich, Land Steiermark and Stadt Wien Kultur. Stadtkino Filmverleih is distributing the film in Austria, with the domestic premiere scheduled for 1 April, while Nathan Fischer of Stray Dogs handles the world sales.

“We want to make art and not a product”

Cineuropa sat down with Austrian filmmaker Daniel Hoesl as he prepared to premiere his latest offering, WINWIN, at Rotterdam

The Dreamed Ones triumphs at the Diagonale

WINWIN: The masquerade of monster capitalism

In Daniel Hoesl's bitingly satirical sophomore feature, which is being screened at Rotterdam this year, “the only religion left is faith in money and even debt” 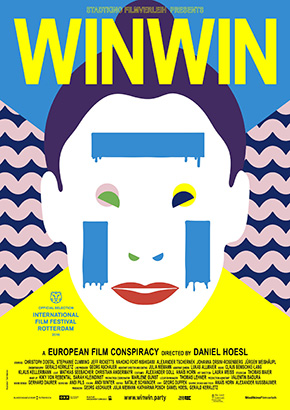 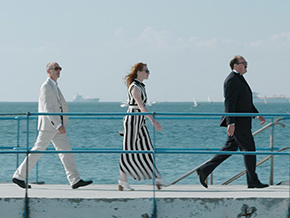 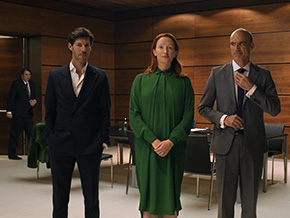 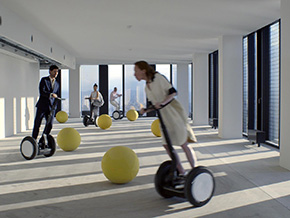 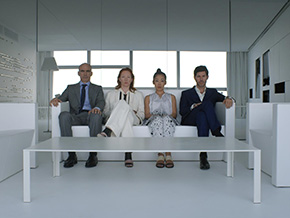