Constitution: "My thoughts on the world"

22/03/2016 - Marco Santarelli’s film is a subtle documentary on freedom and material and spiritual imprisonment, which centres around an experiment at Bologna prison

They’re gathered around a table in the middle of a room surrounded by high walls and bars, trying, each in their own way, with their own way of putting things into words, and their own cultural and religious beliefs, to talk about big concepts in simple terms. Their aim? To draw up a constitution through reflection, starting with a comparison between the constitution of Italy and those of Arab countries such as Tunisia, Morocco and Egypt. Lead in their endeavour in Bologna prison by a catholic priest and mediator for the Muslim community, this workshop in which the dialogue reflects the men’s’ situation in prison, following the path of common reasoning on open-mindedness and occasional limits to tolerance based on the rigidity of beliefs, is central to Italian filmmaker Marco Santarelli’s documentary Constitution [+see also:
trailer
film profile], which was screened in the international competition of the 38th edition of the Cinéma du Réel Festival. After all, the director, who already participated in the Paris-based festival in 2011 with Scuolamedia, doesn’t settle for simply reproducing this astonishing democratic process with finesse and, at times, humour. It’s almost like he introduces a second film into the film, by gradually filling in the details of Samad’s life, a Moroccan prisoner on parole, who took up his studies again whilst serving a sentence in Bologna prison for international drug trafficking, and is now pursuing a degree in law.

Skilfully playing on the confusion between the worlds inside and outside the prison, the bars not always being where you’d expect them to be, for example, the director agilely conveys a sort of parable on accessing the keys to understanding yourself and others. By giving no indications on the past lives of the prisoners participating in the experimental workshop, he sticks to capturing the moment in which they define themselves, adding details of abstract concepts that ring out loud and clear in the context of imprisonment (freedom, education, justice, equality, solidarity, dignity, etc.) through exchanges that don’t always go off without a hitch (on the issue of apostasy in particular) but that finally reach a stage where nuance becomes important. The result is a team effort that harks back to the essence of drawing up a constitution born from everyday life.

Whilst avoiding the pitfall of didacticism and the trap of otherworldliness, Constitution slowly but surely reveals its true nature, a respectful, sensitive and profound portrayal of the importance of getting back to the roots of resistance to all forms of idealogical dictatorship and accepting to listen to other opinions to better define yourself. A path paved with questions that Marco Santarelli embarks on, ending up, among other things, with a very well-done soundtrack and a final edit that offers viewers moments where the film is opened up to the outside world (with Samad’s parents, high-school students that come to listen to the story of his past in drug trafficking and his redemption, a visit to the place where fascism faced resistance in the Apennines, etc.).

Produced by Zivago Media with Ottofilmaker, Constitution was supported by the Istituto Luce Cinecittà.

The initiative, now in its sixth year, re-launches a selection of quality Italian titles penalised by distribution, to promote and distribute them right across Italy

We caught up with Maria Bonsanti, the artistic director of the Cinéma du Réel Film Festival, the 38th edition of which will be held in Paris from 18-27 March

The Italian Federation of Arthouse Cinemas promotes the release of quality Italian and European films over the summer period too. This year’s programme features Fiore, Ma Ma and Louder than Bombs

Constitution: "My thoughts on the world" 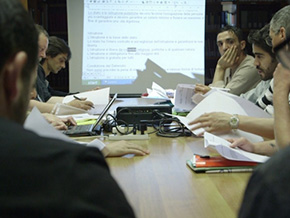