13/05/2016 - CANNES 2016: The film industry’s most gentle and powerful advocate of the people, the great Ken Loach, returns to the Croisette with a deeply moving film

Hayley Squires in I, Daniel Blake

British master of social realism Ken Loach, who won the Palme d’Or ten years ago with The Wind That Shakes the Barley Vent [+see also:
film review
trailer
interview: Ken Loach
interview: Rebecca O’Brien
film profile], has once again overturned the Cannes Film Festival with emotion with a film, the screenplay for which was written, as ever, by the superb Paul Laverty, that refers back to his greatest classics. I, Daniel Blake [+see also:
trailer
film profile] almost transcends the devastating My Name is Joe (the title of which it seems to echo) as an ode to the lowly and society’s outcasts. Indeed, if Loach, more than any other, has his own unique way of telling simple stories about ordinary people whilst never actually making them seem ordinary but special and worthy characters (considerably more so than the abhorrent systems that oppress them – these machines built by Man that have lost all sense of humanity), in I, Daniel Blake, he does so in such a gentle way that it will fill your heart with anger as well as a love for mankind in this film on the unjust and (dys)functional way in which the benefits system works in the United Kingdom, owing to the privatisation and sometimes outsourcing it is subjected to by the Conservative government – fifty years on from the ordeal of two parents that Loach portrayed in Cathy Come Home.

The first few minutes of the film are immediately impressive with the impact they have on the viewer, whilst the credits roll and the background is still black. We hear an ‘interview’ (it’s actually a dialogue of the deaf) with a government employee whose ridiculousness, which is comical from afar but above all infuriating, will sadly be all too familiar to everyone and unavoidably makes the viewer empathise with the title character (Dave Johns). Our compassion for him grows over the course of Daniel’s inept interactions with these heartless office workers (who sometimes don’t even have a body or a voice, as he is incessantly referred to the even more abstruse and frustrating intermediary of the Internet), who drive our brave Josef K up the wall. A Mancunian widower, he would like nothing more than to work, even though he’s of retirement age, but he has a serious heart condition, and the authorities have taken away all his disability benefits.

At the job centre, where he returns regularly and spend hours waiting in line (when he’s not on the phone stuck on hold listening to Vivaldi’s Spring ad infinitum) without it really helping the application process (if anything, the opposite), he meets Katie (Hayley Squires), a young mother with two children who’s in an even more desperate situation. It’s around the way in which their two paths intertwine that the film unfolds, and from their supportive friendship that it draws its overwhelming beauty, as the characters created by Loach and Laverty here are incredibly moving, more than ever before, and that goes for Daniel and Katie just as it does for the latter’s children (as in spite of everything, this quintessential mother has managed to make her children into very lovable people), Daniel’s neighbours, passers-by in the street… in short, people in general.

Loach and his trusty screenwriter juxtapose this magnificent example of humanity, people to whom the instinct to help each other out comes naturally, with unbearable scenarios, with a series of scenes that are all incredibly powerful – led, perhaps, by the scene at the food bank where Katie, who goes without food to feed her children, in a moment driven by pure survival instinct, drinks the ketchup directly from the bottle, before apologising profusely, full of shame. And seeing these brave, generous, funny beings that are full of life placed in situations that make them feel so small is an unbearable experience in itself that shakes the soul to the core.

The film is being sold internationally by Wild Bunch.

more about: I, Daniel Blake

The 2020 EUFA goes to Saudi Runaway

Q&A: Ken Loach • Director of Sorry We Missed You

“Now, the worker assumes all the risk and has to exploit himself”

CANNES 2019: At the press conference for his Palme d’Or contender Sorry We Missed You, Brit Ken Loach unpicked his latest social-realist drama

Review: Sorry We Missed You

CANNES 2019: Two-time Palme d’Or winner Ken Loach tackles the stresses families are put under as a result of the gig economy and the outsourcing of work

By establishing the new Director’s Hub platform and reinforcing the successful Training Ground and Pitching Forum, the Portuguese festival is intensifying its focus on film professionals 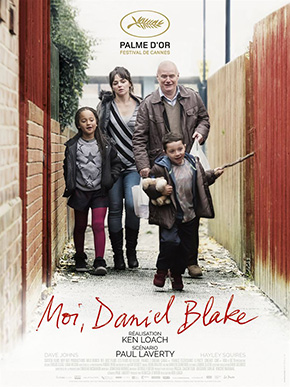 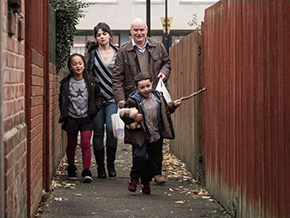 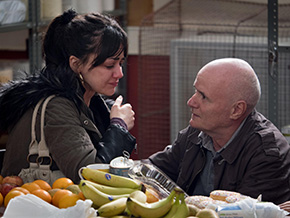 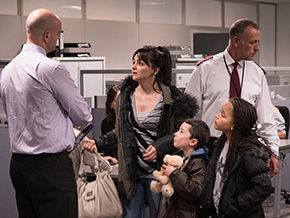